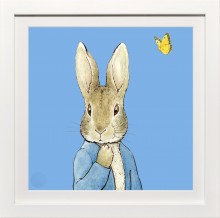 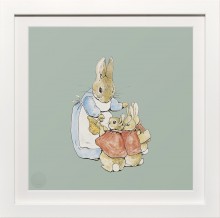 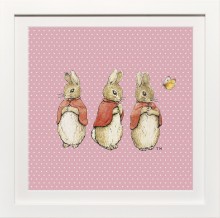 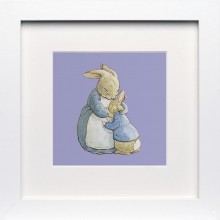 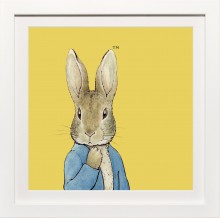 With delightfully whimsical characterisation, Beatric Potter’s World of Peter Rabbit is jam-packed with adorable characters – and surely none more so than the little fella with the big ears in the natty blue jacket who just can’t resist a spot of trouble.

The story of mischievous Peter Rabbit tells the tale a curious little rabbit who falls foul of a mean farmer, Mr McGregor, when he gets caught red-handed (or rather red-pawed) feasting himself on lettuces, French beans and radishes. Peter first appeared in a picture letter Beatrix Potter wrote to Noel Moore, the young son of her former governess, in 1893.

Seven years later, Potter expanded it into a little picture book, entitled The Tale of Peter Rabbit, with black-and-white illustrations. It was rejected by several publishers before it was finally published in 1903 by Frederick Warne.

As an iconic figure, Peter Rabbit is instantly recognisable and exudes a sweet innocent charm, which makes him the perfect poster boy for a baby’s nursery or child’s bedroom.

Dressed in his sweet little blue jacket, Peter Rabbit has become a classic childhood character, loved by generations. Some, including Miss Potter herself, might say he’s a tad naughty, but that just adds to his enduring appeal. Who can’t resist a loveable rogue with rabbit ears?

Art You Grew Up have a wide selection of Beatrix Potter art, posters and prints featuring Peter Rabbit and other characters from his charming pastoral world.

Did you know? Peter Rabbit was based on a real rabbit kept by Beatrix Potter. She wrote that he was very good at tricks and that his temper was unfailingly sweet – not quite an identikit for her fictional character, then, who is prone to occasional disgruntlement.

Fun fact Beatrix Potter oversaw the creation of the first Peter Rabbit doll and bought the patent in 1903, making Peter Rabbit the oldest licensed character in the world. Since it was first published, over 45 million copies of The Tale Of Peter Rabbit have been sold worldwide in more than 35 languages, and it has never been out of print.

Author notes Helen Beatrix Potter (1866–1943) was an English author, illustrator, natural scientist and conservationist best known for her imaginative children’s books, which celebrated the British landscape and country life. Potter published over 23 books, using the proceeds to buy Hill Top Farm in Near Sawrey, a tiny village in the Lake District near Windermere, in 1905. Over the following decades, she purchased additional farms to preserve the unique hill country landscape.

Designer details Art You Grew Up With is owned and run by Russell Singler, an animation superfan since the tender age of five, when his parents took him to see The Jungle Book. At twelve, they bought him his first cel, an original Baloo, and like the bat that inspired Bruce Wayne to fight crime as the mysterious Batman, seeing the cel on his bedroom wall inspired Russell to dedicate his life to buying and selling animation art. The Art You Grew Up With collections include every art imaginable from Anime to Aardman, Peppa Pig to Popeye , Dr Seuss to Charles Schulz – and everything in between.