Foodie families who like good music as a side dish

Train Kingham Station (serviced by First Great Western)
Car The site is about four miles southwest of Chipping Norton on the B4450.
More Directions 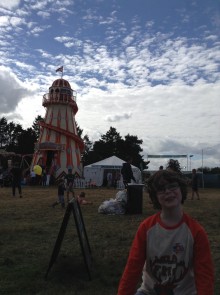 Take a whirl at the vintage fun fair


Though a relative newbie, The Big Feastival has fast become a favourite with the family festival crowd and with two super-cool dads  Jamie Oliver and Alex James as its poster boys, it promises to be a rock n roll foodie extravaganza with family at its heart.

Musician-turned-country gent cheese maker Alex James lends his 200-acre farm in the picturesque Cotswolds as the venue for this end-of-summer festival, while Jamie Oliver adds his culinary clout to gather an impressive roster of chefs who perform cooking wizardry to tantalise tastebuds.

With super-star chef Jamie Oliver as your host, it’s a given that the foodie offering will be spectacular, but this year’s music line-up is pretty tasty too, with headliners Paloma Faith and hot newcomer Ella Eyre rocking alongside festival fav ravs Example and Dizzee Rascal to get the crowd bobbing

Jamie Oliver and Alex James have nine children between them (Jamie has three daughters and one son, while Alex has three sons and two daughters), so they both understand that a festival needs plenty of child-friendly fun to keep kids entertained and happy.

The Big Feastival has heart and soul, too: a percentage of proceeds go to the Jamie Oliver Food Foundation, Jamie’s Kitchen Garden Project which encourages school children to grow their own produce; Fifteen Appretice Programme for young chefs, and Jamie’s Ministry of Food, which promotes cooking skills.

Featured Fun The roster of illustrious chefs joining Jamie to put on their own theatrical performances of culinary wizardry includes Gallic charmer Raymond Blanc, Gennaro Contaldo, Monica Galetti, Nathan Outlaw, Gizzi Erskine, and Mark Hix to name a few. You won’t want to miss the flamboyant Christian Stevenson, aka DJ BBQ who has been cooking up a storm with his culinary showmanship using traditional artisan techniques of the USA’s Deep South (he’s also a presenter on Jamie Oliver’s new FoodTube television channel).

There’s also plenty to savour by way of tasting sessions and demos, including sessions for families and kids, chef Q&As and lively food-related debate and discussion. If you fancy grabbing your moment in the spotlight, the Udder Stage is where you can join workshops and perform.

Also brand new for 2015 is the Healthy Living Zone, which will feature specially curated talks and health food tutorials while The Action Station will re-energise even the sleepiest of heads, with a full program of activities. Health food pioneers Deliciously Ella, Natasha Corrett and Hemsley + Hemsley are among the special guests promoting their unique brands of delicious, nutritious eating and general well-being.

Dining Tables Food definitely takes equal headline billing at this festival, with all manner of world foods represented here – from Goa to Mexico and everywhere in between – all under the unifying edict that they must be simply delicious. Choose from pies, paellas, pizzas and pasta, street food and artisans produce and local wares, including Alex James showcasing his selection of cheeses at the Cheese Hub. Street Food Alley features the best of the British street food scene, including Mac ‘N’ Cheese at Anna Mae’s, East Asian delights from Dorshi, tasty hotdogs (gluten-free meat or vegetarian) from Popdogs, and a “nose to tail street food menu” from The Cauldron. There’s also a host of festival food stands, including award-winning Cafe Môr for lobster sandwiches and beach beef burgers, Churros Garcia, deliciously buttery sweetcorn at Cotswold Corn Roast Company, Indian cuisine at JoHo Soho, Mexican at Los Churros Amigos, Paellaria, crispy duck wraps at The Duck Truck and The Fabulous Fish Finger Company.

* Want to see more family-friendly festivals for 2015. Check out our 12 We Love… Summer Festivals round-up *