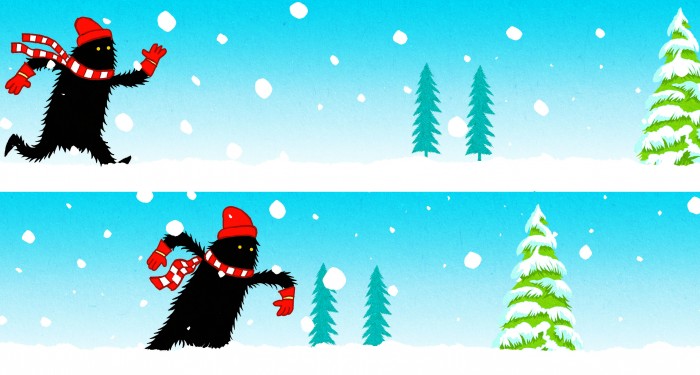 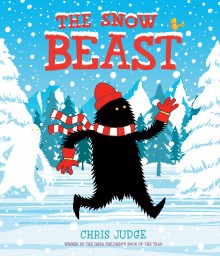 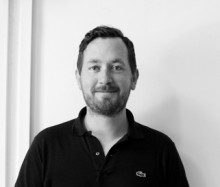 Yay! It’s snowing, and that means one thing: preparations for the annual Snow Festival can commence. But when disaster strikes, the celebration is in jeopardy. Can The Beast come to the rescue?

After making his debut in 2011 as a solitary figure in search of companionship, the good news is that The Beast has now clearly found himself a stellar stalwart in the community. The bad news is that the villagers’ snow tools has disappeared!

But the resourceful Beast is not one to be easily beaten, so he sets about trying to recover the tools and bring the culprit to justice. In true super-sleuth tradition, the Beast must follow the clues: in this case, big beastly footprints.

Trudging through the snowy landscape, the black furry ball of beastliness is in hot pursuit of the mystery thief. But wherever the Beast wanders, chaos, calamity and comedy are never far behind

When the thief in question turns out to be a neighbour in need of assistance, the kindly Beast helps him out, then decides to introduce the villagers to his new friend, but it doesn’t quite go according to plan.

With lots of comic mileage in Beast’s slapstick antics in the snow, the lively illustrations lend an animated comic-strip feel to proceedings. And despite his slightly bumbling character, Beast is an endearing character whose heart is always in the right place.

This is a jolly seasonal offering featuring Chris Judges’ amiable dark shaggy figure, who looks a bit like Tove Jansson‘s Stinky from the Moomin world, but without the sneaky grumpiness.

And while he has clearly found a soul mate in Snow Beast, it is the sweet shaggy Beast who is still the real star of the snow show.

Fun fact The Yeti, aka the Abominable Snowman, is an ape-like creature said to inhabit the Himalayan region of Nepal, India and Tibet. The Nepalese believe the Yeti is nocturnal, it whistles and growls, and can kill with a single punch.

Did you know? Other names that the Yeti goes by around the world include Almas in Mongolia, Batutut in Vietnam, Bigfoot in North America, Yowie in Australia and Fear Liath Mor (the Big Grey Man of Ben MacDhui or simply the Greyman) in Scotland.

Author notes Chris Judge is an illustrator, artist and children’s picture book author based in Dublin, Ireland. He studied graphic design at Dun Laoghaire Institute of Art, Design and Technology in Dublin and worked in web design before moving into illustration full time in 2005. His work is a mixture of illustration, painting and design, and has appeared in advertising, newspapers, magazines, exhibitions and several other media. In 2011, Chris’s first picture book, The Lonely Beast (Andersen Press), was published in Ireland, the UK, the US and across Europe and went on to win the Specsavers Irish Children’s Book of the Year 2011 in the Bord Gáis Energy Irish Book Awards. Chris also illustrated Roddy Doyle’s new children’s book Brilliant and and collaborated on a book for older children with comedian David O’Doherty called Danger is Everywhere!