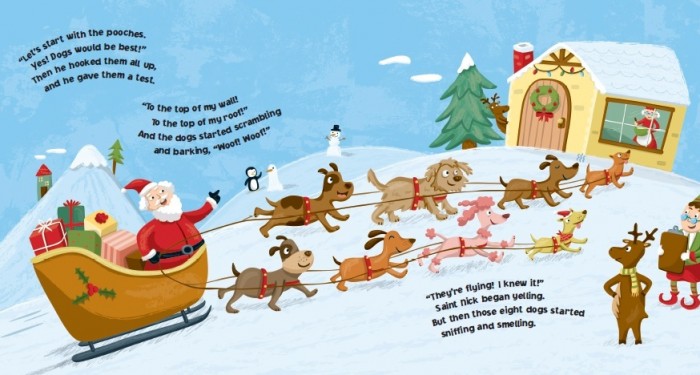 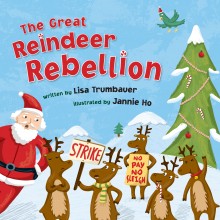 Turkey and cranberry sauce, Christmas pudding and brandy butter, sleighbells and reindeer: there are some festive couplings that should be sacrosanct. So imagine poor Santa’s disbelief when he discovers his faithful reindeer are on strike!

Christmas as we know it is suddenly plunged into peril with the news that Santa’s reindeer are in revolt, staging a ‘No Pay, No Sleigh’ protest. Claiming they can no longer work in such poor conditions and feeling the strain of pulling a sleigh weighed down with festive booty, they are making a consolidated stand. Oh deer!

Santa needs to have his wits about him as he attempts to find willing replacements to pull his sleigh. Cue a gathering of various animals not seen since Noah assembled his ark crammed with creatures great and small.

Thankfully, there are plenty of candidates for the job. The only trouble is that each animal in turn proves its unsuitability. The dogs end up sniffing out the scent of Mrs Claus’s tasty cookies, the cats are distracted by a mouse, the flamingos lose their balance and some naughty kangaroos start pilfering pressies…

Just as Santa is on the point of despair, an unexpected crew come to the rescue. Repentant reindeer? Not quite, but they’re happy to help if only Santa will concede to a few of their requested, including chocolate and cable TV.

This is a jolly tale, written in witty rhyming text that’s perfect to read aloud, with lots of lively details to spot in the lively illustrations. Children will relish the rising sense of panic and chaos, but of course be relieved that order is finally restored in time for the big Christmas delivery.

Oh, and if you’re wondering about a certain reindeer with a red nose, don’t worry. Rudolf survives with his good reputation intact, as he isn’t actually featured in this story that sticks to the traditional eight reindeer.

Fun fact In traditional lore, Santa Claus’s sleigh is led by eight reindeer: Dasher, Dancer, Prancer, Vixen, Comet, Cupid, Donner and Blitzen, who appeared in the famous 1823 poem by Clement C Moore A Visit from St. Nicholas (also known as The Night Before Christmas). Rudolf, the famous red-nosed reindeer, made his first appearance in a storybook written by Robert May to be given out to children at the chain of Montgomery Ward department stores in 1939.

Author notes Lisa Trumbauer has written more than 50 children’s books, including The Haunted Ghoul Bus, the New York Times bestseller A Practical Guide to Dragons and The Body in Motion.

Jannie Ho has worked as an illustrator at Scholastic and Nickelodeon. She was also an associate art director at Time Magazine for Kids before becoming a full-time children’s book illustrator.