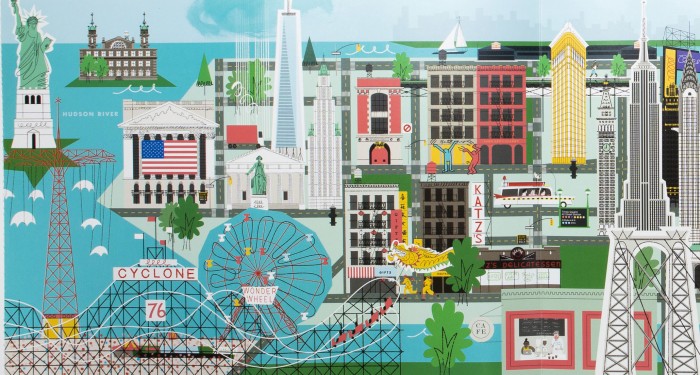 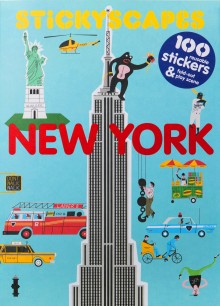 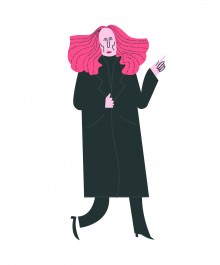 Bet this one works for American Vogue!
 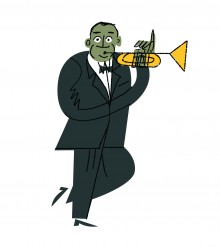 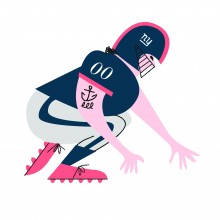 The Statue of Liberty, the Empire State Building, ice-skating at the Rockerfeller Center: New York is filled with iconic sights –  and an equally colourful crew of local inhabitants. And with this fun sticker book, you can decide how your own vibrant New York cityscape takes shape.

With its towering skyscrapers and famous landmarks, there’s no mistaking the location of New York, New York – so good they named it twice! And this double-sided fold-out play scene offers two views of New York – one ‘real and present-day’, and one ‘imaginary and historical’ – so you can compare and contrast to see how it’s changed and what is still standing. There are also 100 reusable stickers to mix and match as you please.

See the multifarious magnificence of the Big Apple unfold – quite literally – before your eyes with a panoramic view of one of the world’s most famous cities. Then use the stickers to populate as you please – and no, that Giant Gorilla doesn’t have to content himself with the Empire State!

The historical panaroma shows the city taking shape, with a windmill at Fort Amsterdam showing its roots as a trading post by colonists of the Dutch Republic, who named the area New Amsterdam in 1626. (In 1664, the British seized New Amsterdam from the Dutch and gave it a new name, New York City.

It also features some of the city’s oldest establishments like the Flatiron Building, Washington Square Arch and the brownstone buildings of Brooklyn. The scaffolding’s also up at Radio City Music Hall, nicknamed the “Showplace of the Nation.”

Flip the cityscape to see the vibrant modern-day city with a mega Cyclone roller-coaster at Coney Island, the neons lights of Broadway and the ice-skaters at the Rockerfeller Center.

Now for the really fun part: using your stickers to popular the city, and what a lot of choice you have. From the arty cool of Andy Warhol to a flame-haired fashion editor with more than a passing resemblance to Grace Coddington, from the famous French highwire artist Philippe Petit who famously walked a tightrope between the Twin Towers of the World Trade Center in 1974 to escapologist Harry Houdini, ready to perform one of his tricks. You can make Franklin and Eleanor Roosevelt and Jay Z neighbours, or invite superheroes, aliens and monsters into your imaginative play.

The quirky side of city life is also represented by The Naked Cowboy, who is a familiar sight at Times Square in his white cowboy hat, white boots and white underpants with the words ‘Naked Cowboy’ emblazoned on his butt. Only in New York…

Lots of fascinating facts about the vibrant city’s most famous and legendary inhabitants add to its educational angle, as it gives a slice of New York city life that’s as tasty as the pizza slices that were first sold in Little Italy in 1905.

A wonderfully entertaining and informative set that has to be the next best thing to visiting the Big Apple yourself!

Fun fact The most famous subway grate in New York City has to be the one on the corner of New York’s Lexington Ave and 52nd Street, where Marilyn Monroe famously got caught in the updraft in the film The Seven Year Itch. Although the scene had to be reshot in a Hollywood studio (the crowds made too much noise) the iconic images were used for publicity. The white dress that Marilyn wore, designed by William Travilla, was sold at auction in 2011 for $4.6 million.

Did you know? One of the most colourful myths about New York is that there are huge, albino alligators in the city’s sewers. Supposedly, baby alligators bought as pets were flushed into the system once they grew too feisty to handle. Sewers are dark, dangerous places with lots of nasty things in them, but it is highly unlikely that there are any alligators.

Illustrator notes Tom Froese is an illustrator who aims to celebrate ideas with whimsy, simplicity, good humour — and when necessary, gumption. His work can be seen in numerous publications including Monocle, Harvard Business Review and Wired UK, as well as in various national and international retail establishments. On the side, Tom regularly collaborates with Everlovin’ Press to create hand-printed letterpress products. Tom works with local and international agencies, individuals and businesses on every imaginable kind of project. He works out of an old converted hog barn in the middle of nowhere.