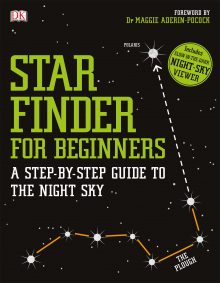 There’s a certain romance about looking up in the starry night and wondering just what is out there. This helpful guide helps you navigate the sky, with tips and information on where and how to spot the brightest sky (for the best chance, head for the dark, clear skies of the countryside to avoid the city’s light pollution that dampens your star-gazing chances!).

Starting with the easiest asterism (the shape formed by stars) to spot in the Northern Hemisphere – the group of stars that make up the Plough – this book takes you on a journey across the skies, discovering the shapes and patterns that were identified by our ancestors.

Filled with fascinating facts and detailed information that will fuel the imaginations of stargazers, this practical guide provides a handy route-through more than 20 northern-hemisphere constellations.

With a forward by eminent space scientist Dr Maggie Aderin-Pocock, the book also gives the story behind each constellation – with a host of starry Harry Potter-esque names like Sirius and Bellatrix – as well as a glow-in-the-dark Night Sky Viewer.

The brightest star in the night sky is Sirius, part of the Canis Major constellation. The asterism represents one of Orion’s hunting dogs, Laelaps who was deemed so quick that no prey could escape him. According to Greek mythology, when Laelaps failed to catch the Teumessian Fox, Zeus turned him to stone and placed him in the sky as Canis Major.

Dr Maggie Aderin-Pocock MBE is a leading space scientist. She is well known as the co-presenter of the BBC’s astronomy programme The Sky At Night. In 2009, Dr Aderin-Pocock was awarded an MBE for her services to science education.

Ian Ridpath is highly respected in the field of astronomy. In 2012, Ridpath was awarded the Klumpke-Roberts Award of the Astronomical Society of the Pacific for his contributions to the public understanding and appreciation of astronomy.