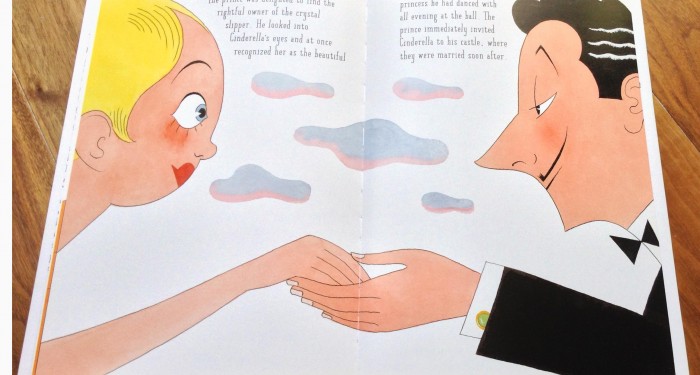 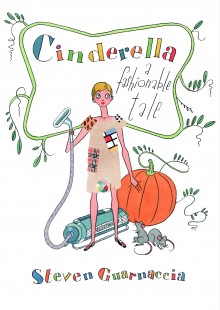 The most famous rags-to-riches fairy tale of them all is given a fashionable twist by artist Steven Guarnaccia. Cinderella has never looked more stylishly a la mode.

The story of the fair young maiden who overcomes the miserable oppression of her life to be wooed by a handsome Prince Charming is universally known. Wilfully mistreated by her wicked stepmother and cruelly mocked by her ugly step sisters, Cinderella is  subjected to a life of chores among the dirty cinders – hence her name.

When the eligible prince of the kingdom delivers a free-for-all invitation to a ball, Cinderella’s stepmother dictates that Cinders must stay at home; after all, she can’t go to a ball wearing rags (Keen fashion spotters will recognise some famous fabrics in her patchwork ‘rags’, including the signature Burberry check, the Mondrian-inspired YSL graphic and a Dior leopard spot).

Guarnaccia’s fairy godmother is a far cry from Disney’s bumbling bibbidi bobbidi boo variety from the classic 1950 animation. Indeed, the fairy has changed genre and she becomes he in the form of none other than Karl Lagerfeld, complete with dark glasses, snowy quiff and ponytail. And boy, does he have some snazzy fashion solutions at his fingertips!

Should Cinders step out in a geometric print playsuit by Vavara Stepanova, or an avant-garde Yves Saint Laurent? David Bowie’s Aladdin Sane get-up would certainly get her noticed in the crowd. Even the classic glass slipper is given a fashion twist with a Muiccia Prada design in transparent PVC.

The depiction of Cinderella is rather fashion-forward (or perhaps that should be retro?). With her sleek gamine crop, Cinderella has the wide-eyed innocence of Twiggy – with a touch of ingenue Mia Farrow in The Great Gatsby and a pinch of Popeye’s Olive Oil. And the Vivienne Westwood gown she finally flounces off to the ball in is, as the fashion pundits would say, to die for!

This is a wonderfully fresh and witty take on the Cinderella tale with the emphasis unashamedly on fashion (unlike the latest Disney adaptation which focuses very much on moral courage and kindness). The end papers, dotted with fashion sketches, also provides a potted history of iconic fashion chronicling the past century, with many flamboyant designs that have shaped the fashion world ever since.

As for Cinderella and her Prince Charming. Well, of course they lived fashionably ever after.

Did you know? There are many versions of the Cinderella story, including one that dates back to Egyptian times that tells of a young servant girl called Rhodopis, who is mocked and abused for having blonde, curly locks in a world of sleek Cleopatra hairdos! The most popular version of Cinderella was written in French by Charles Perrault in 1697, under the name Cendrillon. It was Perrault who introduced the fairy godmother, the pumpkin that becomes a magical carriage, and the glass slippers, which have become staples of the story ever since.

Fun fact As part of the celebrations to launch the brand new Cinderella feature film, Disney has commissioned some of the world’s most famous shoe designers, including Jimmy Choo and Salvatore Ferragamo, to give their take on the classic glass slipper as worn by Cinderella.

Author notes Steven Guarnaccia is an internationally renowned illustrator and designer. His picture book Goldilocks and the Three Bears: A Tale Moderne was awarded the prize for best children’s book about art at the 2000 Bologna Children’s Book Fair. Guarnaccia was a founding faculty member of the School of Visual Arts’ MFA Design program and serves on illustration juries for American Illustration, the Society of Illustrators, and the AIGA. He collaborated with Paola Antonelli, curator of design at the Museum of Modern Art, on the 1997 retrospective and accompanying catalogue of Achille Castiglioni’s work.