ALEX, THE DOG AND THE UNOPENABLE DOOR

Alex, the Dog and the Unopenable Door

Young readers who always choose the less obvious path, the side of the underdog and the strangest games in the playground will love this quirky but intelligent fantasy adventure about a plucky (some would say foolhardy) young boy and his unlikely canine companion.

Not all children yearn for stories of wizards or dinosaurs from outer space, but a lot of them enjoy something just a little bit fantastical, and Ross Montgomery’s story about this boy-and-dog mission to dodge the baddies as they cross the Forbidden Land is for just such children.

Following the impossible and improbable exploits of Alex Jennings – who has been sent away to boarding school by his mum after his famously failed explorer father escaped (again) from hospital yelling “squiggles” – it soon unfolds that evil henchman are after Alex, in the mistaken belief that he alone knows the meaning of the word “Squiggles”.  The motto of the boarding school is ‘To step beyond the Cusp and finally triumph over the Forbidden Land’, but can Alex achieve this when he’s being pursued by evil Davidus Kyte and his henchman? You can bet he’ll try!

Told in a richly descriptive but light and funny conversational tone, Alex, the Dog and the Unopenable Door hurtles along with incidental heroics, laugh-out-loud misunderstandings, out-of-this-world dogs and a few sharp teeth for good measure

This is the first novel from London-based Montgomery. He wrote stories as a teenager and his knack for collecting and ordering great, stored away ideas comes through in the text. A sparky tale, with a healthy number of unexpected twists (given that plucky underdogs are not uncommon in children’s literature), this is an undemanding yet inspiring read.

Author Notes Ross Montgomery wrote stories at school and college, then tried his hand at being a pig farmer and a postman before channelling all of this experience into being a teacher, which he continues to do at a primary school in London. 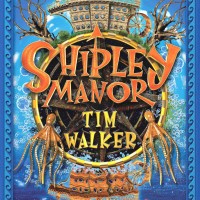