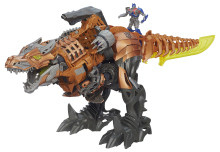 Grimlock, the leader of the Dinobots, was one of the stars in the Transformers: Age of Extinction movie. Massive, mighty and menacing in his robot mode, Grimlock is even fiercer when he transforms into a horned, mechanical Tyrannosaurus Rex.

An iconic toy franchise for 30 years that has extended to include comic books, an animated TV series and feature films, Transformers began life as a range of transforming toys by Japanese toy company Takara Tomy. Hasbro bought the brand in 1984. Since then, the Transformers toy line has focused on warring factions of transforming alien robots, the heroic Autobots, and their evil opponents, the Decepticons.

The biggest appeal of Transformers toys has always been their magical talent for reinvention. With a twist here and a turn there, a Transformer can change from a vehicle or animal into a robot action figure and back again.

In the best Transformers tradition, Grimlock Stomp & Chomp has been designed to switch easily from robot to dinosaur mode by pulling a lever on the back of the toy (On the downside, the lever does slightly spoil the contours on the dinosaur’s back). As befits his name, he also stomps and chomps with various roaring sounds (that often just pipe up on their own) and eyes that light up with a steely red glare.

As an added bonus, the Optimus Prime play figure that comes with the set can ride Grimlock into battle, unlocking weapons, lights and sounds as his figure is positioned on Grimlock’s back (there are magnets on Optimus Prime’s feet to activates these features). You can also buy additional play figures that will also activate these features, triggering different lights and sounds depending on whether Grimlock is riding into battle with an Autobot or a Decepticon on his back.

The set also includes Grimlock’s signature weapon of choice, the energo-sword, which he can hold in robot mode, or attach to his tale when in dino mode.

Did you know? In 2007, USA Today conducted a polled to discover which Transformer the public wanted to appear in the second installment in the Transformers film series. Grimlock tied in second place with Devastator. The winner was all-round good guy Soundwave, with a fifth of all votes.

Keep in Mind… This is a large and rather cumbersome piece of kit, which makes for a suitably imposing Transformers toy, but may also make storage more tricky. Although the model has some movement with his ‘stomping’ action and opening mouth, it is quite rigid and does not have posable limbs, for example.

What Kids Love The novelty value in transforming one product into different characters. The interactive weapons, lights and sounds are a beloved bonus too.

What Parents Love Transformers score high on the nostalgic “I loved Transformers when I was a kid…” If you ever grappled with earlier carnations of Transformers, you’ll know it wasn’t always so straightforward to transform them from one mode to another. In this case, transition from dino to vehicle and robot is simplicity itself using the one-step action. Lego The Lord Of The Rings Pirate Ambush 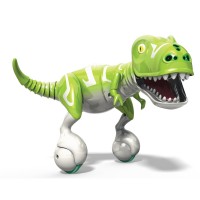