Beto from the Tazoo family
 Paco from the Tazoo family
 Taurex from the Proteon family
 Swomp from the Proteon family
 Vulkram from the Proteon family
 Blatta from the Proteon family
 Aki from the Proteon family

Once upon a time the Rubik’s Cube revolutionised the way we thought about puzzles and play. Now the KOR Geomag is taking that thinking a step further with a puzzle you build in various twists and turns and which then transforms into a primordial beast!

The KOR Geomag system is a pretty impressive new development from the Geomag toy brand. Not only is this a construction toy, but it is all about imaginary play as well with seven different characters in two KOR families: the battle hardy Proteons and the somewhat friendlier looking Tazoos. Each of the characters comes with between 53 and 103 pieces that all clip to a hollow metal magnetic core which becomes the fulcrum for days, weeks, – nigh – months of fun for any child who likes a construction puzzle (or a primeval dinosaur, or a space mystery or science fiction).

KOR Geomag characters will have kids occupied for days (OK, perhaps months) first with the build, then the twisting and transforming and then the imaginative play possibilities

Each of the seven characters – there is Aki, Taurex, Blatta, Swomp and Vulkram in the Proteon family and Beto and Paco in the Tazoo family – comes with a back story that tells of why they landed on earth. The blurb for the Proteons explains that these are “heroes and primordial beasts fighting in a pit against the other in epic battles. Each character took its strength from the environment where it landed. Volcanoes, swamps and hard rocks gave different characteristics and fighting techniques.”

Meanwhile, the sweeter looking Tazoos are “cute little creatures dwelling in an idyllic fantasy world generated by children’s imagination. Their natural environments are the sea and the forest where they grew up after landing on the earth. Squids, sharks, whales but also lizards or frogs are only a few of the creations of the Tazoo line.”

However, when they arrive into your home these creatures come in a suitably human-friendly box which opens to reveal a core (yup, that’s the KOR!!), a series of pieces that make up the inner shell, and another series of parts that make up the outer shell (all designed to allow for maximum ‘transformational’ possibilities). There are also various character accessories, such as limbs, weapons and face pieces. The first layer of pieces clip together to form the first inner shell of the ball (when it most resembles a Rubik’s Cube), then the second layer of pieces clip over the top of that first shell to make more of a rugby ball shaped figure, and it is onto this second shell that the various accessories are added.

A little like a Rubik’s Cube meets Transformer meets primordial dinosaur meets space age Lego set… this new toy is definitely a combination that has multiplied the wow factor!

Keep in Mind… There are lots of bits to this game, so while it is not as demanding in the storage department as LEGO, don’t share it with your under-threes (both because of the bits and also because of those magnets!) or take it on travels, as you are bound to lose that one crucial piece and then there will be no fun for anyone!

Designer Details Based in Switzerland, Geomagworld SA is the manufacturer of the famous Geomag magnetic construction toys. The first Geomag product was the 27mm construction rod, which was invented by Italian Edoardo Tusacciu, and the company now has four major lines – the Baby, Kids, Pro and KOR products. 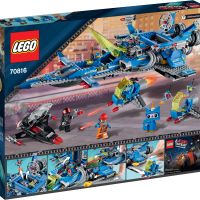 The Snorgh and the Sailor