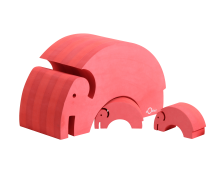 Elna the Elephant in Red
 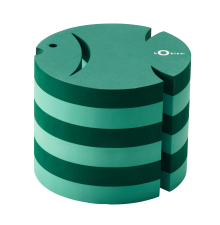 Froda the Fish in Green


Dennis the Crocodile in Pink

People simply can’t resist playing with bObles tumbling furniture. Not only are they cute and come in fun colours, they are also incredibly sit-grab-push-and-roll-onable. They might just be the ultimate in play furniture – or should we say fun-iture, which is why we think they deserve to be known as a toy.

Designed using very simple geometric forms, bObles are cut in the shape of animals – albeit extremely cubist animals – and are intended as furniture to be tumbled upon. But these are also perfect for a highly interactive and informal playground in your home, delivering a brilliant fusion of toys and furniture all at once.

Children are instinctively drawn to bObles, and are soon taking them for a little rock and a roll, a balance, seesaw or jump. Very quickly, they realise that tumbling and moving with these creatures is actually a pretty fun experience (which is also developing your child’s all-important gross motor skills).

There are fish, crocodiles, elephants, anteaters, walrus, and even a zoo in the bObles habitat! Each one has a unique design that exercises different motor skills – the crocodile, for example, can become a staircase, a see-saw or a pair of stilts, while the elephant is a rocker, a bridge and even a wraparound baby seat

To add one or more to your Inspiration and Gift Moodboards, take a look at the bObles range here. Of course, the most glorious combination is to have a series of different tumbling animals so your child can create obstacle courses that they – and their playmates – can negotiate (not to mention a bevy of colourful play pals they can hang out with when watching a movie later on… ). For example, if you combine a chicken with a crocodile you get a see-saw, or pull the anteater apart to make a table and chairs or a series of stepping stones; put them all together and you could be marching up the stepping stones to walk along the seesaw crocodile… endless combinations for brilliant motor skill workouts!

Designed in Denmark and manufactured in the Far East, bObles are made from a soft EVA foam that is nonetheless firm enough to support children as they try and balance on them. (Indeed, it is also strong enough to support adults, so don’t desist from having a play on these yourself!) This material is excellent on a number of levels – firstly, because it is water resistant, so it won’t stain easily, and secondly, because it can quickly be cleaned with a cloth and some water, and thirdly because, while there might be a few ‘tumbles’ as children learn to master their bOble-ing, when they do tumble, at least they’re dealing with soft-to-the-head furniture, making this ideal furniture to consider for children under two.

Each piece comes in a selection of gorgeous colours – from aqua greens to gentle pinks as well as blues and princely purples – making them easy to include in modern family interior schemes. And the beauty of these animals is that they have a long love-span with their owner kids – from the moment they’re toddling to tweenagehood. After all, who wouldn’t love a friendly elephant to call one’s own?

What Kids Love Not only are these fun characters to play with, they are also adaptable pieces of furniture to be sat on, tipped upside down, swung upon…

Designer Details bObles began in 2006, when Bolette Blædel, an architect by profession, went on maternity leave with her first child. The children’s furniture she found seemed uninspiring, as most pieces were merely miniatures of adult furniture so, together with her sister Louise who is a designer, she set out to create children’s furniture that would spark a child’s imagination through play and learning while developing their motor skills. And thus the idea of the tumbling animals and bObles was born. The creators of bObles take great pride in ensuring this furniture has a long lifespan and can be passed through the family. The EVA foam is free of toxins and phthalates and the company only works with manufacturers who comply with all human rights, child labor, regular labor, environmental and anti-corruption laws. Once a year, the designers visit the factories to make sure that production is run according to this agreement. 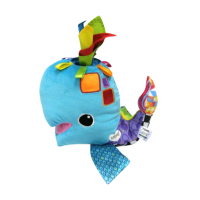