The Baby Bite Stool can be a stool, a side table, or even a puzzle, as one slots into another to create a playful range of colour combinations.

Made from roto-moulded polypropylene (in very basic terms, plastic that has been moulded by rotational force), these stools are great for outdoors as well as indoors. The Baby Bite Stools also represent the first collaboration between prolific and supremely playful designer Karim Rashid and xO Design – a design powerhouse whose early founders were the likes of Philippe Starck and Gérard Mialet and which sets out to cross design lines at every turn. As Starck described the partnership: “To make a beautiful baby,  parents have to be in love,” and xO was a definite love affair.

The design team describes the
Baby Bite Stool as a zoomorphic, organic, animated object. As far as we are concerned, they are an incredibly practical piece of furniture
and super-super fun

Designer Details  Born in Cairo and raised in Canada, Karim Rashid is one of the world’s leading designers, and now practices in New York. With more than 2500 products to his name, and designing for an impressive array of clients from Alessi to Dirt Devil, Umbra to Prada, Miyake to Method, Karim is radically changing the aesthetics of product design and the very nature of the consumer culture. Karim has won so many awards, it is impossible to name but a few, including the prestigious I.D. Magazine Annual Design Review, Red Dot Design Award, and Chicago Athaneum Good Design Award numerous times. His work is in the permanent collections of 14 Museums worldwide including MoMA and SFMoMA and he exhibits art in various galleries. Karim was an associate Professor of Industrial Design for 10 years and is now a frequent guest lecturer at universities and conferences globally. Karim has published numerous books, including his guide to living Design Your Self (Regan Books, 2006) and I Want to Change the World (Rizzoli, 2001). 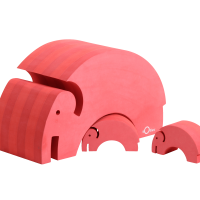