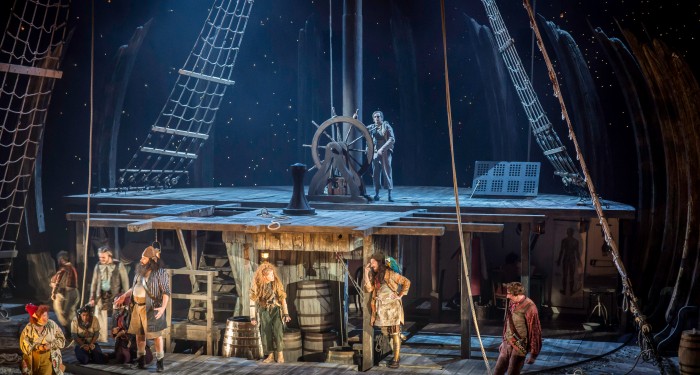 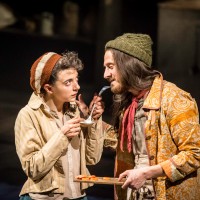 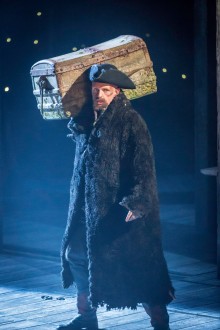 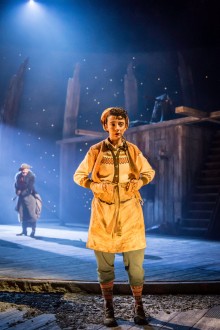 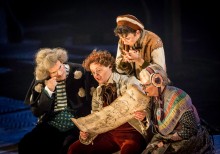 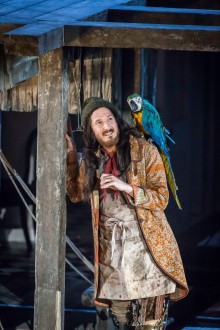 From the tardis to treasure-seeker


A right pair of pirates


Treasure Island at the National Theatre
*

Devilish skullduggery and swashbuckling shenanigans are the order of the day on the (not so) good ship Hispaniola in this lively adaptation of the world’s best loved pirate tale. But all is not what it seems with Jim lad…

Sitting in the darkly atmospheric theatre before the show set sails, there are sounds of gently crashing waves all around, setting the seafaring scene so well that you almost feel yourself swaying to the rhythm. With no curtains to raise, the dimly lit set is ready and waiting for action. It has an eery ghostly feel, with the stage cocooned within large curved beams that look like they just might suddenly snap shut, like a greedy crab ensnaring an unsuspecting prey. It also looks a bit like a burnt-out carcass, the type of place that Jonah might have called home.

As stars twinkle serenely in the dark night sky (one of the many artful special effects) we meet our young narrator, Jim Hawkins – only in this instance, ‘Jim’ is really a lass named Jemima (played with androgynous ingenuity by a sprightly Patsy Ferran). Her grandmother the only person who is privvy to her real persona. To everyone else, Jim is an eager lad, trying to eke out a living as an innkeeper.

This is a story about pirates, so there are soon shifty types lurking in shadows, harbouring dark secrets and muttering murderous tales of the wickedest sea-faring man that ever live. Any distinguishing features?
Well, he only has one leg and his best friend is a parrot.

As luck would have it, Jim’s dodgy lodger Bill Bones meets a sticky end, leaving Jim and his grandmother to ransack his bag to find a mish-mash of crazy items – in a comic Mary Poppins-style, they are items that are too impossibly large to fit – and enough gold to make their fortune. But Jim’s grandmother is an honest God-fearing soul, and insists they only take what they’re owed in rent money. They soon discover that Bill Bones also had a much sought-after treasure map in his possession – and now Jim has it. And so the real adventure begins…

As a man whose dark reputation goes before him, our introduction to Long John Silver (played by Arthur Darvill, who. we recognised as sweet Rory from Dr Who) is underplayed. He may have the long-haired look borrowed from Johnny Depp as Cap’n Jack, but Darvill’s Silver is a rather thoughtful soul. Far from menacing at first, Silver assumes a modest demeanor, with a blanket over his knees so that his identifiable peg-leg is hidden from view, and shows a generous pedagogic side to his nature, giving Jim (and the audience) a mini masterclass on how to navigate using the stars. For this nifty demonstation, stars are magically illuminated overhead, linked into constellations with blue neon lines. But Silver’s mood can turn from thoughtful to threatening on a sixpence – so imagine how he can transform when it’s a matter of gold!

With the treasure map handed over to honest acquaintances of Jim’s, Dr Livesay and Captain Trelawney, the tale gathers pace when the Hispaniola sets sails with the good Captain Smollett at the helm. The staging is quite magnificent as the set rises dramatically, like a monster from the depths, and three levels of the ship appear so the audience can see the deck, the captain’s quarter and ship’s kitchen below where Cap’n John is now chef all at once.

It’s not plain sailing for long as a mutiny erupts, storms rage and Long John Silver is revealed to be an unscrupulous wretch greedy for gold. But will he end up with the treasures he craves or just his comeuppance?

Now cavorting around a barren island landscape, with bubbling volcanic swamps that rise and fall, Jim finds an unlikely ally in Ben Gunn (Joshua Jones wittering gamefully to himself), a demented soul gone stir-crazy after being abandoned by his shipmates and living a life of solitude ever since. Crazy, yes, but still with wits enough to have the last laugh.

This lively adaptation of Stevenson’s classic tale is pretty true to the original, but a familiarity with the story would certainly make it easier for a younger audience to follow. The quirky twists come with the switch of gender of Jim to Jemima, which brings a touch of modern feminist girl power to what was traditionally a very male orientated tale and offer the opportunity for a few gags and banter about gender ambiguity. As Jim lass rightly says “girls need adventure, too.” (The Royal Navy officially discouraged captains from taking women to sea, although the records of naval surgeons reveal that women were sometimes smuggled aboard and gave birth at sea. A few women also went to sea dressed as sailors and worked alongside their shipmates for months without being discovered. They were, however, two women pirates of the Golden Age period whose lives were well documented: Mary Read and Anne Bonny. If you’ve seen Aardman Animation’s The Pirates! In an Adventure with Scientists you’ll recognise the reference!)

There’s a surprising star turn, too, from Captain Flint who is not the villain from Stevenson’s original, but instead is Long John Silver’s parrot, a cheeky fella with an answer for everything. Clever animatronics and nifty visual trickery bring him to life and feathers fly, quite literally, when he flits furiously around the stalls. Expect excited gaggles of children to be gathering up a few of his feathers in the interval as souvenirs; luckily he sheds quite a few so there’s enough to go round!

Did you know? The Jolly Roger is the traditional English name for the flag flown by a pirate ship when it is about to attack. Most commonly, it has a white skull-and-crossbones symbol on a black background. Jolly Roger had been a generic term for a jovial, carefree chap since the 17th century – so not really the most apt nickname for rough-tempered pirates!

Fun Fact From the early days of seafaring, ship’s figureheads were used as religious symbols to protect the ship, as well as giving it ‘eyes’ to navigate. Female figureheads were popular, usually bearing one or both breasts. This represented the superstitions of the seamen. Women on board ship were thought to be unlucky, but a naked woman was supposed to have powers to calm a storm at sea.

Why go For a taste of life on the ocean waves in the company of the world’s most notorious pirate.

Who is it best for Adventure seekers with a penchant for pirates.

Our Favourite Bit The clever staging evokes a dark, mysterious atmosphere and really makes you feel like you’re all at sea.

Top Tip Don’t forget to buy a souvenir programme to pique budding pirates’ interest: it has lots of fascinating insights into the Golden Age of Pirates, including gruesome facts about the scurvy and squalour that was part and parcel of a pirate’s life.

Don’t Go If you’re a confirmed landlubber yet to earn his sea legs.

While You’re Here The multifarious delights of the South Bank is on your doorstep, so wander along the Thames and daydream of being a pirate. For those who want to let off a little steam, head to Jubilee Gardens where there’s a long scramble of climbing ropes and wooden planks, perfect for pretend pirate play.

Author notes Robert Louis Balfour Stevenson (1850–1894) was a Scottish novelist, poet, essayist, and travel writer. His most famous works are Treasure Island, which was published in 1883, Kidnapped, and Strange Case of Dr Jekyll and Mr Hyde. A literary celebrity during his lifetime, Stevenson is one of  most translated authors in the world. His works have been admired by many writers, including Jorge Luis Borges, Bertolt Brecht, Marcel Proust, Arthur Conan Doyle, Henry James, Cesare Pavese, Ernest Hemingway, Rudyard Kipling, Jack London, Vladimir Nabokov, J.M. Barrie, and G.K. Chesterton.