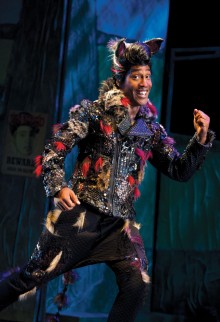 A pinky and perky quartet of pigs
 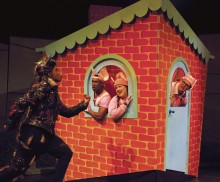 The well-loved children’s fairytale is given a lively soundtrack of rock ‘n’ roll riffs with a Big Bad(ass) Wolf in leather and an Elvis-style quiff and a trio of hip-hop piglets who are hot to trot(ter).

Kicking off with the amusingly familiar mummy lament “This place is a real pigsty!” that for once is no exaggeration, this musical adventure begins with Mummy Pig reluctantly informing her trio of offspring that it’s time to leave home and set up house on their own.

And whilst their mother might dream of them finding safety in numbers and living ensemble, these bickering siblings – wittily named Bar, Bee and Q – each decide to do their own thing.

Now how to build a home? Bee (Leanne Jones), a keen environmentalist and eco-champion, decides to make her ‘green’ house of bio-degradable straw. Bar (Taofique Folarin), the macho bro with more brawn than brains, opts for a house of twigs, leaving bookworm Q (Daniel Buckley), the most sensible piglet in the litter, to build his house with bricks.

And they all lived happily ever after? Not quite. It wouldn’t be a fairy tale worth its salt without some impending threat and menace. Cue the Big Bad Wolf… but does he really deserve the bad rap?

With shades of Travolta in Grease, Wolf swaggers his way onto the scene with an air more debonair than demonic as he croons “I’m neither big nor bad, I’m just a wolf that’s a bit misunderstood.” But we can’t help feeling that this wolf just
might be telling porkies!

With his seemingly affable nature and nifty footwork (audiences expect a display of twinkletoes from Simon Webbe since his Astaire-like performances as a finalist in  Strictly Come Dancing in 2014), audiences might be fooled by Wolf’s toothy grim – were it not for the fact that Mummy Pig let slip that Daddy Pig’s previous meeting with the Wolf did not end happily… (Incidentally, if you check out the Disney animated version of The Three Little Pigs, you’ll see the picture on the wall of the brick house depicts ‘Father’ as a string of pork sausages!).

When Wolf gets a whiff of succulent pig, his nostrils start to flare and he reverts to type with huffing and puffing, as each little pig’s building prowess is put to the test.

As hay goes flying and twigs take a tumble, Bee and Bar go a-running and take refuge with Q, but have they found a safe haven in the house of bricks?

With all the ingredients of the classic pig tale – including plenty of huffing, puffing and hairy chinny-chin-chins – it’s the catchy show tunes that really bring the house down

This is a wonderfully winning ensemble, with a combination of witty words by George Stiles and great tunes by Anthony Drewe and an energetic and talented cast who can act, sing and strut their stuff.

Why go? For a lively musical retelling of a well-loved fairy tale by award-winning Stiles and Drewe that brings a cool contemporary touch – these curly-tailed dudes are wearing Nike trainers! – to a classic staple of childhood.

Who is it best for? Fans of musical theatre who like songs they can sing along to. Its 55 minute running time and familiar narrative make it great for younger kids, too.

Top Tip Treat yourself to The 3 Little Pigs CD soundtrack so you can have sing-songs at home.

Our favourite bit The duo of owl puppets who sing and sway like Doo-Wop backing singers to Wolf’s signature song Misunderstood.

Don’t go If you’re afraid of the Big Bad Wolf! Though we have to admit this one plays it more for laughs and sympathy.

While you’re there Take a stroll to 107 Charing Cross Road to the newly reopened Foyles Bookshop for a browse through their wonderful selection. Kids books are on the lower ground floor, and there’s a great cafe and free events during the Children’s Festival Summer of Fun that runs from July to September 2015.

Did you know? The popular version of The Three Little Pigs first appeared in Joseph Jacobs’ English Fairy Tales (1898), who credited his source as James Orchard Halliwell in Popular Rhymes and Nursery Tales (1849). The narrative also bears similarities to The Wolf and the Seven Young Kids by the Brothers Grimm.

Fun fact The Three Little Pigs starred in Walt Disney’s Silly Symphonies  in 1933, an animated short which included the song Who’s Afraid of the Big Bad Wolf? The popular ditty became one of the most well-known Disney songs. It was also the inspiration for the title of Edward Albee’s 1963 play Who’s Afraid of Virginia Woolf?

About Stiles and Drewe The dynamic musical theatre song-writing partnership of George Stiles (music) and Anthony Drewe (lyrics) began when they met at Exeter University over thirty years ago. During their collaboration they have written the musicals Betty Blue Eyes, Soho Cinders, Honk! Just So, and Peter Pan A Musical Adventure, as well as the new songs, dance and vocal arrangements for the world-wide smash-hit Cameron Mackintosh/Disney production of Mary Poppins. Since winning the Olivier Award for Best New Musical in 2000, their show Honk! has been seen by more than 6 million people in over 8,000 productions in more than 20 languages. Stiles and Drewe have also completed a trilogy of musicals for younger audiences: The Three Little Pigs, Goldilocks and the Three Bear and The Three Billy Goats Gruff.