Stick Man and the moon
 You only have to recite out loud any one of Julia Donaldson’s many children’s books – and she has written a mighty 167 to date – to know that she is a wordsmith extraordinaire who loves playful rhythm and rhyme. Stick Man, the book about a humble fella often mistaken for a stick, is a delightful story that comes to life in song and dance in this show by the talented Scamp Theatre.

With a cast of three actors niftily taking on all roles with a dash of delightful kitsch and a raft of chirpy tunes, Stick Man leaves the comfort and safety of home (“the family tree”) where he lives with “his stick Lady Love, and his Stick children, one, two, three” and so begins his odyssey of epic proportions.

The beauty of Donaldson’s lyrical text is that it lends itself so well to song and performance, with repetitive catchy refrains inviting the audience
to join in

The story reaches its climax just as Stick Man, weary from his travels and life itself, faces a terrible end as he’s about to be tossed on the fireplace, when he hears some strange shenanigans from the chimney. Cue Donaldson’s comic punch line: “Not a Stick Man, but a Stuck Man. Now who could that be?” Clue: he’s wearing red, is on the chubby side and laughs with a loud “Ho ho ho.”

With a delightfully feel-good festive finale, Stick Man is happily reunited with his family and vows “I’m sticking right here in the family tree,” leaving the entire audience to set off home with a happy and warm glow.

Why go For a lively song-and-dance rendition of a well-loved tale.

Who is it best for Fans of Julia Donaldson’s brand of lively, witty and warm storytelling – and that pretty much includes everyone, no?

Top Tip Use this fantastic adventure to spark your child’s imagination as a thought-provoking talking point next time you take a walk in the park or woods. Can your child find any relatives or friends of Stick Man?

Our favourite bit The simple yet effective props like the umbrella that cleverly ‘showers’ raindrops, plus the fact that you actually end up feeling empathy for a stick!

Don’t go If you’re a dog who thinks that sticks are only good for a game of fetch.

While you’re there There’s a Christmas fairground in the main Leicester Square piazza, with lots of twinkling lights, a big wheel and a variety of rides which children will probably love (but which you might like to avoid). The theatre is in one of the small streets off the main square, so if you make your approach via Chinatown you can avoid the fairground and admire the wonderful colours of the Orient in the shops and restaurants of Chinatown instead.

Author Notes Born in 1948, Julia Donaldson is a celebrated British writer, playwright and performer, the 2011–2013 Children’s Laureate and the prize-winning author of some of the world’s most-loved children’s books, most notably the modern classic The Gruffalo which has sold over 5 million copies worldwide. Julia is best known for her popular rhyming stories for children, especially those illustrated by Axel Scheffler, which include Stick Man, The Gruffalo, Room on the Broom, and Tiddler And Other Terrific Tales. Their books have sold millions of copies and have been translated into 40 languages. Julia also received an MBE in 2011 for her services to Literature. 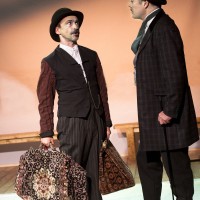 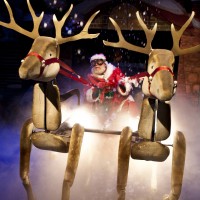