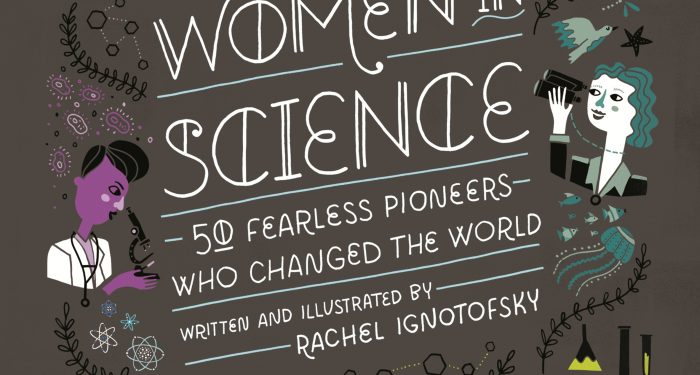 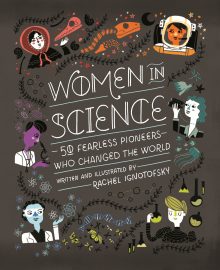 Written and illustrated by Rachel Ignotofsky 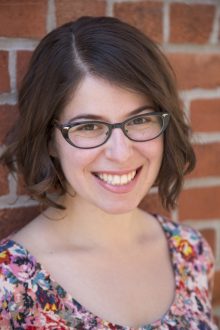 Women in Science by Rachel Ignotofsky

“Nothing says trouble like a women in trousers.” This was a common belief back in the 1930s. Thankfully, the fifty trail-blazing women in this celebratory tome rose above the bait and proved their inestimable worth with amazing feats in the world of science, technology, engineering and maths.

There are 50 truly amazing women featured from well-known figures like Marie Curie and fossil collector and palaeontologist Mary Anning to lesser-known but equally brilliant pioneers like the 18th century astronomer, poet and mathematician Wang Zhenyi, Elizabeth Blackwell, the first female doctor in the United States, and Alice Ball, the African-American chemist who cured leprosy.

Each of these inspiring women – trailblazers and pioneers one and all – showed true grit and determination in the face of opposition, along with an inquiring mind, inquisitive nature and an insatiable thirst for knowledge that ensured they never gave up.

Their academic expertise and cutting-edge research has proved ground-breaking and life-changing but it is the fact that they achieved such greatness in male-dominated spheres where women were not only actively discouraged, but were often overlooked and scorned that is so inspiring.

Each page is brought to life with stunning illustrations, quirky facts and background information that recounts the many challenges that these women faced – and overcame. There’s also a timeline that catalogues an impressive roll-call from Hypatia of Alexandria,  the first recorded female mathematician in 400CE, to Valentina Tereshkova, the first woman in space in 1963. Less triumphant are the latest figures that the gender gap in STEM work force in the US in 2011 was 52%, with men taking over three-quarters of the workforce.

With some way still to go before we see true equality in these fields, let’s hope this brilliant book will inspire a future generation of female scientists, mathematicians and engineers to believe that anything is possible with a can-do attitude and an indomitable spirit. As Navy Admiral and Computer Scientist Grace Hopper states: The most damaging phrase in the English language is ‘we’ve always done it this way.’

Medical physicist Rosalyn Yalow, who developed radioimmunoassy (RIA) technique and made important discoveries about how insulin works inside the body, kept chilled champagne in her office every year just in case she won the Nobel Prize. She did in 1977.

As well as acting alongside Clark Gable, Spencer Tracy and James Stewart and having a star on the Hollywood Walk of Fame, screen siren Hedy Lamar was also an inventor, developing FHSS (Frequency-Hopping Spread Spectrum) used to control torpedoes, now the foundation for modern GPS, Wi-Fi and Bluetooth.

Rachel Ignotofsky grew up in New Jersey, USA, on a healthy diet of cartoons and pudding. She graduated with honours from Tyler School of Art’s graphic design programme in 2011. Now she lives in beautiful Kansas City, Missouri, where she spends all day drawing and learning as much as she can. She has a passion for taking dense information and making it fun and accessible and is dedicated to making educational works of art. Inspired by history and science, Rachel believes that illustration is a powerful tool that can make learning exciting. She uses her work to spread her message about education, scientific literacy and powerful women.