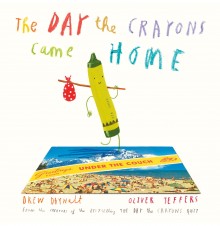 THE DAY THE CRAYONS CAME HOME 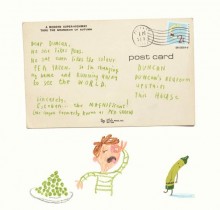 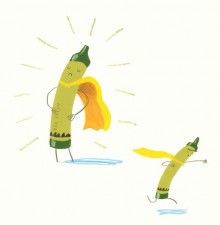 The Day The Crayons Came Home

We fell in love with the crayons in revolt in their debut presentation The Day The Crayons Quit, and we’re delighted to see a raft of hilarious new grievances from the crew of colourful characters eager to put their persuasive cases to long-suffering Duncan.

The premise of a child’s humble plaything – the crayon – as the star of these witty books,masterfully penned by Drew Daywalt and wittily illustrated by Oliver Jeffers, is pure genuis. Why? Because it’s a scenario that we all recognise so well.

We’ve all invested in tubs of nice shiny wax crayons so our children can express themselves with master scribbles and scrawls, and we all know that, sooner or later, our child’s furious endeavours will result in crayons broken or trampled underfoot, chewed by baby or house pet, dropped between sofa cushions or squished in between floorboards… Even the most beloved of crayons can end up a stubby little shadow of its former self.

The time has come for the crayons – like the Empire – to strike back. Discarded, forgotten or lost, each of these crayons has a worthy cause for complaint. What’s more, their grumbles will make us all feel a little guilty about how we’ve been treating these innocents who just want
to bring colour into our lives

In this second installment of the crayon’s plight, the narrative takes the form of postcards, written in Oliver Jeffers’ signature fair hand. Each story is a little vignette that tells a sad and sorry tale that’s also guaranteed to raise a smile.

There’s Maroon Crayon who was used to colour a scab then suffered the indignity of being sat upon by Dad. There’s the formerly quarrelsome twosome Yellow and Orange (who couldn’t agree which was the best colour for the sun) who have since been left in the sun and are now stuck together for eternity. Then there’s Brown Crayon who was perfectly happy to create the fur of a big cuddly bear, but never quite lived down the ignominy of being used for what bears allegedly do in the woods (yes, poop).

There are a couple of running gags, too, from Pea Green who’s fed up of being unpopular (“Noone likes peas”) so is changing his name to an exotic sounding Estaban the Magnificent and if off to see the world, and Neon Red, who was lost on holiday and is now making the long journey home. There’s even the added novelty of Glow in the Dark Crayon sharing his spooky Halloween tale.

After hearing their various tales of woe, Duncan is ready to make amends to every crayon he’s ever mistreated. Trouble is they’re all now so misshapened that they won’t fit into their box any more.

The solution? With a bit of creative thinking outside the box, Duncan assembles a suitably artistic and colourful swish new residential home where every crayon is welcome.

The first book was a stonker – and this one is even funnier. This is one happy homecoming we can all celebrate!

Did you know? The world’s most famous crayon manufacturer Crayola makes 3 billion crayons a year, enough to circle the world six times. Crayola crayons currently come in 120 colours including 23 reds, 20 greens, 19 blues, 16 purples, 14 oranges, 11 browns, 8 yellows, 2 grays, 2 coppers, 2 blacks, 1 white, 1 gold and 1 silver. The labels, however, are only made in 18 shades, which cover the full colour spectrum.

Fun fact The largest crayon in the world, Big Blue, weighs 1500 pounds, is 15 feet long and 16 inches in diameter. It was made from 123,000 old blue crayons that were gathered from children around the country. It is so big that it would colour an entire football field.

** HOW DID IT ALL BEGIN? ** Read our review of the award-winning The Day The Crayons Quit.