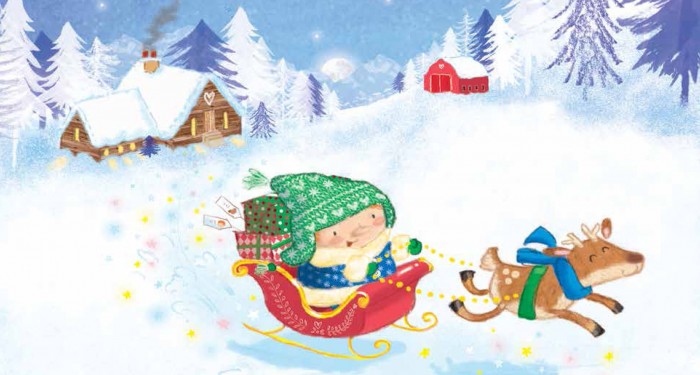 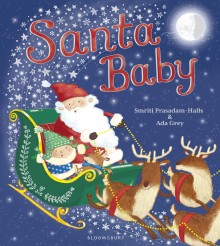 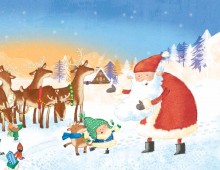 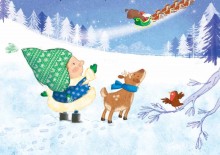 We’re well accustomed to the notion of Santa Claus delivering gifts to all the children of the world. This jolly tale takes a look closer to home where there’s a little fella and his reindeer friend who are keen to join Santa’s fun.

Feeling disgruntled – and just a little annoyed – about being left at home just because they are “too little”, Baby Santa and Roo suddenly see an opportunity to get in on the action. Santa has left two parcels behind and the diddy duo decide to set out on Parcel Rescue Mission.

But while their intentions are good, it’s easy to get distracted when elves want to have snowball fights and playful penguins invite you onto the ice for some skating fun.

Before they know it, night is falling and they still haven’t completed their mission. It’s time to get a wiggle on, but this driving a sleigh malarky isn’t as easy as it looks!

As a wannabe Santa-in-Waiting, Baby Santa is desperate to join his daddy on Christmas Eve. In the meantime, he and his reindeer sidekick Roo find their own important task. But then it all goes awry and they find themselves
in a bit of a pickle…

Tangled up in Christmas lights, cold and dishearted and dangling precariously from a great height, Baby Santa and Roo soon realise that the job is trickier than they thought.

Suddenly the magical sounds of jingle bells signals a superhero Santa on the horizon who snatches up the twosome for the flight – and night – of their life!

Written in rhyme that makes it perfect for reading aloud, this sweet tale puts a delightful festive spin on the toddler predicament of being small and the restraints that smallness imposes (despite the protests).

With soft illustrations and cute depiction of Santa Baby with his glorious ruddy curls and his little reindeer friend, there’s also plenty of twinkling stars and speckles of snow to evoke a really festive feel. There’s even added sparkle on the cover.

Oh, and of course the title is bound to make you burst into the classic (rather flirty) song original purred by Eartha Kitt in 1953, and since covered by various chanteuses from Madonna, Mariah Carey and Taylor Swift: Santa Baby, hurry down the chimney tonight.

Fun fact Santa works more than a 24-hour day. He has 31 hours to deliver all his presents to children across the world, thanks to the time zone differences.

Did you know? In Canada, Santa Claus has his own unique zip code: HOH OHO.

Author notes Smriti Prasadam-Halls has been a children’s writer and editor for more than ten years and has written several children’s books, including the bestselling Jingle Jangle Jungle, illustrated by Axel Scheffler. Smriti lives in Richmond-upon-Thames.

Illustrator notes Ada Grey spent several years working for design companies before deciding that she preferred doodling. She lives in Brighton with her daughter and cat, Ming the Merciless. She collects picture books, draws in her studio (which is very messy) and loves cheese and spaghetti, especially together.