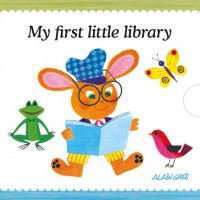 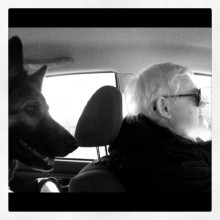 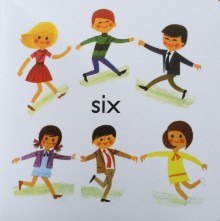 The childhood staples of letters, numbers, colours and animals come to vibrant life in this chunky quartet of baby books, all neatly contained in a mini library.

With a whole wide world out there for your baby discover, what better way to begin to uncover its delights than through the pages of a delightful picturebook brimming with vibrant life?

These dinky little boardbooks, with baby-safe rounded corners for added tactility, are an absolute charm.
Filled with bright and breezy images and familiar objects, they provide the perfect taster of the joys of books

Alain Grée’s beautiful illustrations from the 1960s and 70s have a naivety of form and bold use of colour, combined with a sense of French fashion chic  (boys in turtle neck jumpers and Beatles-style skinny ties and girls in dresses with kitten bow-tie blouses).

So why did artist Grée choose to make children’s books? “No doubt because it took me a long time to grow up myself!” he says.

Fun fact A sentence that includes all 26 letters of the English alphabet is called a pangram. A famous pangram (often used in keyboard typing practice) is: The quick brown fox jumps over the lazy dog. Another shorter one is: Pack my box with five dozen liquor jugs.

Author notes French illustrator and author Alain Grée was born on July 21, 1936 in Eaubonne near Paris. He studied in Paris at the Ecole des Arts Appliqués (atelier d’Art Graphique) and at the Beaux Arts de Paris. As an author and illustrator of children’s books, Alain Grée published over 300 books, mostly in the 1960s and 1970s. His books have been translated around the world into 20 different languages. He is also author of three detective novels for La Chouette editions and produced children’s broadcasts on the French national television for two years. 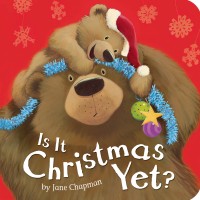