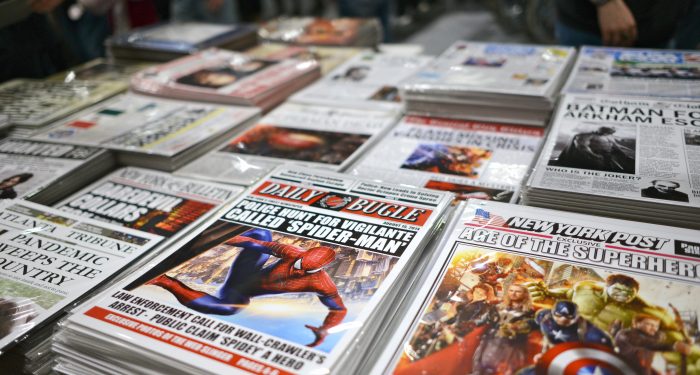 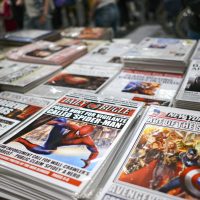 Great for fans of fantasy, sci-fi and graphic novels, London’s top comic shops are perfect for a spot of light reading and shopping. Here’s the best the city has to offer:

Book & Comic Exchange
Devoured your comic and crave something new? The Book & Comic Exchange will buy your old comics – and tempt you with another! Swap for cash or vouchers to use on
future purchases, the joy is in riffling through the diverse rolling stock of new and vintage to find your next conquest.

Why visit?
“Our stock ranges from sought-after comics like New Mutants #98 (the first appearance of Deadpool) and out-of-print Moebius comics to our extensive selection of 50p back issues and bargain ‘surprise’ bags of 10 comics for £1.”
Luke, Book & Comic Exchange

Forbidden Planet
The king of geekland, this Wonderland of Weird has an entire basement dedicated to reading matter, with anime, manga, graphic novels and comics alongside popular YA reads like Harry Potter and The Hunger Games. The ground floor is dedicated to all manner of merchandise with pocket-money treats like button badges and book marks to exclusive figurines that are more of an investment than plaything. Be prepared to stay a while to peruse mini figures, Lego, homeware, and apparel from every imaginable brand from Adventure Time to Zelda.

Why visit?
‘For Adventure Time fans, I’d recommend the ‘I see Oooo’ VR Viewer, where players take on challenges and discover why the Ice King is such a party pooper. Finn-tastic!’
Danie Ware, Forbidden Planet

Gosh! Comics
Duck down to the basement of this friendly Soho bookshop to seek out the finest in comic book culture. Friendly and knowledgeable staff are happy to advise, whether you’re a connoisseur or neophyte. They also hold regular drop-in events and workshops too. 1 Berwick Street, W1F 0DR.
Why visit?
“The Phoenix Comic, a weekly anthology comic in the great British tradition of The Beano is brilliant for kids. Aimed at 8- to13-year-olds of any gender, each issue is a heady mix of humour, adventure and creative ideas.”
Andrew Salmond, Gosh! Comics

30th Century Comics
For the more serious collector and those who love to browse, 30th Century Comics specialises in vintage American and British comics, annuals and books with over 100,000 items from 1900-2000 and beyond.

Why visit?
“From Batman to Beano and Bunty and from Spider-Man to Eagle, if you’re looking for vintage classics, you’ll find it here.”
Rob Rudderham, 30th Century Comics

The Cartoon Museum
As well as reflecting the museum’s displays (currently an exhibition on ‘Heroes and Villains’ til Oct 30), the shop stocks hot new products, as well as how-to books to inspire kids to read, draw and engage with cartoons and comics. Gifts, posters and cards at pocket-money prices too. 35 Little Russell Street, WC1A 2H.

Why visit?
“As a nation with an unwavering love of Doctor Who, anything Doctor-related goes down well. Another perennial favourite is How To Draw The Marvel Way, which is as popular as it was when it was first published in the late 1970’s. The cute, funny Simon’s Cat books and soft toys are proving popular too.”
Alison Brown, The Cartoon Museum

Mega City Comics
Gracing the streets of Camden for nearly 40 years (and officially awarded a ‘King of Camden’ status for local retailing), Mega City Comics aptly has a mega offering of comics and graphic novels, as well as T-shirts and other cool stuff. With a welcoming ambience and helpful and knowledgeable staff, they also host regular celebrity signings and special events.

Why visit?
“We’re anticipating the new Doctor Strange movie will put Marvel back on a roll this Autumn. We’ll be celebrating with original comics from the 60’s and 70’s through to graphic novel collections, T-shirts and Pop vinyl: the Doctor is officially in the house!”
Martin Kravetz, Mega City Comics

Orbital Comics
There’s always something unexpected in this traditional comic book shop with a twist. The dedicated Kid’s Corner features all the latest superhero adventures from Marvel and DC Comics – and much more. One title currently proving popular is ‘Secret Hero Society: Study Hall Of Justice’ which features a young Bruce Wayne, Clark Kent and Diana (aka Wonder Woman) as they begin a new term at ‘The Ducard Academy’ and uncover all manner of villainous goings-on. 8 Great Newport St, WC2H 7JA.

Why visit?
“For new readers, I’d highly recommend Luke Pearson’s Eisner-nominated Hilda series, following a young blue-haired girl who is able to befriend weird and wonderful creatures on adventures in her mountainous Icelandic home. It’s a fun, light-hearted read that is difficult to put down, and is loved by readers of all ages.”
Ryan Jenkyns, Orbital Comics

Love comics? Check out what’s in store at London Comic Com – the meeting place for fans of the art of sequential graphic storytelling.