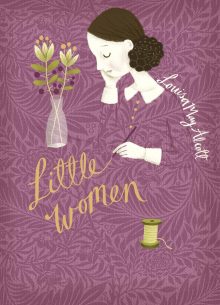 by Louisa May Alcott

Little Women by Louisa May Alcott

Long before ‘girl power’ became a thing, the little Misses March were trailblazing pioneers of what it means to be an independent, forthright and, when necessity dictates, fierce and feisty female!

Four little women – Margaret, Jo, Beth and Amy – with big hearts, and life’s big adventures on their minds. The classic story of a quartet of siblings tells the heart-warming coming-of-age tale from teen to young womanhood of girls whose various temperaments and personalities make them as eminently entertaining today as in 1868 when Little Women was first published to public success and critical acclaim.

With eloquence and warmth, Alcott recounts the sharply felt effects of acute penury, the emotional dramas, romantic spats and petty sibling rivalries – along with deep affection and loyalty – that must necessarily accompany life in a household brimful of females.

Margaret, Jo, Beth and Amy are up there with Jane Eyre and Anne of Green Gables in the sacred canon
of great fictional females
and gals with gumption!

A roller-coaster read with plenty of humour and more than a little occasion to reach for the Kleenex. Remember, Joey from Friends had to put the book in the freezer when Beth is “really, really sick”.

Filled with believable characters that you really care about and domestic dramas at times trivial, at times momentous, it is with good reason that Little Women is on the must-read list of any modern reader. This beautifully rendered hardback edition, in collaboration with the V&A, features an exquisite cover pattern from the museum’s William Morris Collection, makes it a sumptuous visual treat as well as curl-up-and-get-cosy read.

Did you know? The character of budding writer Jo is based on Alcott, while Meg, Beth and Any are  based on Louisa’s three sisters Anna, Lizzie and May (who was the inspiration of Amy, an anagram of May).

Fun fact Louisa May Alcott began writing Little Women in May 1868. She worked on it day and night, becoming so consumed with it that she sometimes forgot to eat or sleep. On July 15, she sent all 402 pages to her editor. In September, a mere ten weeks after starting the book, Little Women was published. It became an instant best seller and turned Alcott into a rich and famous woman.

Louisa May Alcott was born on November 29, 1832, in Germantown, Pennsylvania. Eminent essayists and literary elites, Henry David Thoreau and Ralph Waldo Emerson were family friends. Alcott wrote under various pseudonyms and only started using her own name when she was ready to commit to writing. The great success of Little Women (1869–70) gave Alcott financial independence and created a demand for more books. Over the final years of her life, she turned out a steady stream of novels and short stories, mostly for young people and drawn directly from her family life. Her other books include Little Men (1871), Eight Cousins (1875) and Jo’s Boys (1886). She died in 1888.

Inspired by the Victoria and Albert Museum’s collection of the work of Arts and Crafts pioneer William Morris (1834–1896). Morris was well known for his wallpaper and fabric designs, and for his mastery of colour.

Illustrator Liz Catchpole has selected Morris patterns from the V&A archive and introduced new artwork to create, as Morris himself would say, “a beautiful book.”