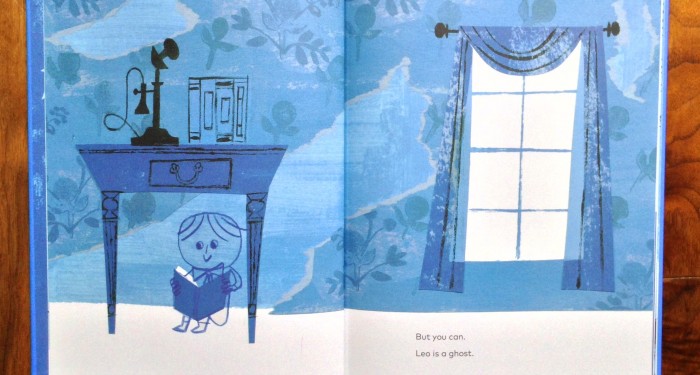 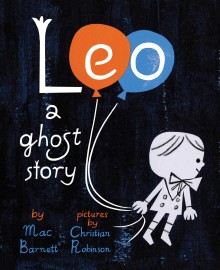 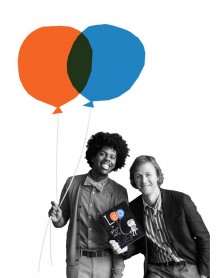 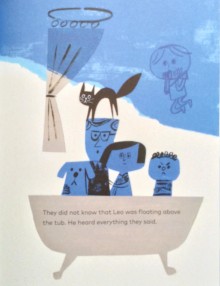 Uh-oh! Not everyone loves Leo
 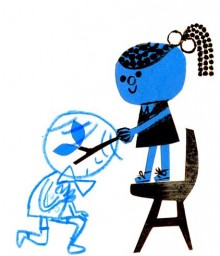 Mint tea and honey toast are on the housewarming menu as a little ghost Leo welcomes a new family into his haunted home. But somehow it doesn’t look like this family are prepared to make friends.

Hues of blue set the scene as a sweet little ghost, with his silhouette charmingly rendered in chunky blue crayon, pootles about his haunted pad, drawing pictures in the dust. After years of lonely solitude, he can’t hide his excitement when a young family move in and he decides to give them a warm welcome.

With more gentilesse than ghoulishness, Leo’s brand of haunting takes on distinctly hospitable tones. This one’s a charmer, so whatever you do, don’t call Ghostbusters!

Turns out the family are not as open-minded as Leo hoped, and his housewarming gift doesn’t go down well at all. And, not one to stay where he is not welcome, Leo sets off on his own odyssey into the big city.

Wandering rather like a lost soul in a city that is bigger, noisier and more scary than he remembered, Leo finally stumbles across a little girl called Jane who instantly invites him to join in her pretend play. Delighted to have found a willing playmate at last, Leo is in his element. But he just has one nagging doubt: would Jane be scared of him if she discovered that he’s really a ghost?

At its heart, this tale is an affirmation of friendship and acceptance, with Leo learning that a true friend will love him as he is – plus, he does turn out to be a rather useful burglar deterrent! It’s also a powerful paen to the wonders of a child’s imagination, and the intricate games about knights and dragons, golden treasures and glorious feasts, initiated by go-getter Jane, have a familiar resonance about them that will make parents smile.

Wordsmith Mac Barnett imbues his character with all the charms of his famous friendly forebear, Casper, while the rich blue palette of Christian Robinson’s delightful illustrations give the whole drama a suitable ethereal, dreamy effect.

Oh, and the book just happens to have a dedication by Mac Barnett to his friend and sometime collaborator Jon Klassen, who also happens to know a thing or two about things that might spook you out. Read our review of his brilliant book The Dark here.

Did you know? The Hollywood Roosevelt Hotel is supposedly home to two famous guests: Marilyn Monroe and Montgomery Clift, who lived at the hotel for three months while filming From Here to Eternity. Spooky!

Fun fact Casper the Friendly Ghost is the personable protagonist of the Famous Studios theatrical animated cartoon series. According to the 1995 feature film Casper, his full family name is Casper McFadden.

Author notes Mac Barnett is a New York Times bestselling author of over 18 books for children, including two Caldecott-Honor-winning collaborations with Jon Klassen: Sam & Dave Dig a Hole and Extra Yarn, which also won the Boston Globe-Horn Book Award and the E.B. White Read-Aloud Award. He writes the Brixton Brothers series of mystery novels and, with Jory John, The Terrible Two. He lives in Berkeley.