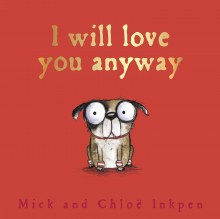 I WILL LOVE YOU ANYWAY

By Mick and Chloe Inkpen 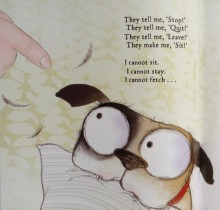 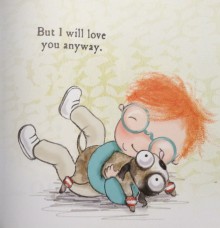 I Will Love You Anyway

An exuberant new puppy wreaks havoc in the household with his playful but disobedient ways. But when all training attempts fail, will the poor pup be banished for good?

With his big boggly eyes echoed by his cute owner’s round spectacles, the hero of this doggy tale is a boundless bundle of mischief. But whilst his owner can’t fault his energy and zest for life, his playful ways and propensity to run away at every opportunity are also getting him into trouble.

Pet ownership can be onerous as one young boy discovers as his playful pup tests everyone’s patience. He chases cats, chews shoes, slobbers on sofas and runs away. All the time. Oh dear! Now someone has suggested this problematic puppy has to go…

Feeling sad and dejected, our little pup runs away – again – but this time he keeps on running, until he finds himself soggy and afraid, alone in the dark. Has his owner abandoned him? Nah! There’s a search party out and boy and dog are happily reunited.

Written in jokey rhyme from the perspective of the puppy shamelessly giving an honest account of his habits – “I like your face, I bite your leg, I nip your finger, Paw your head” – and vivacious illustrations that perfectly convey his cheeky vitality, as well as his devotion to his young owner.

There are also lessons on the responsibilities of pet ownership and the tricky task of puppy training, with no glossing over some of a puppy’s less-than-desirable habits. Yet it is the powerful human-pet bond between boy and dog that finally wins the day, as despite the dog’s mischievous ways, his owner promises to love him unconditionally.

That’s what puppy love is all about, after all.

Fun fact Just like babies, puppies need to exercise their teeth, which is why a lot of puppies will chew anything in sight. They need to be trained on what’s OK to chew, such as their own chewy toys, and what’s not – like your shoes and the sofa.

Did you know? Like humans, puppies are born without teeth. When they’re born, they can’t hear, see or smell. Puppies don’t open their eyes or begin to hear until they’re 9 to 12 days old, and can’t smell until three weeks after birth.

Author notes Mick Inkpen is the author-illustrator of the popular Kipper and Wibbly Pig stories, which have sold millions worldwide. He won the British Book Award for Lullaby Hullaballoo and Penguin Small and the Children’s Book Award for Threadbear. He has also been shortlisted for the Kate Greenaway Medal and the Smarties Award three times, winning Bronze for Wibbly Pig’s Silly Big Bear. In addition to this, Kipper won a BAFTA for best animated children’s film in 1998. It wasn’t until Mick became a father that he began his career in children’s books. He now collaborates with his daughter Chloe in a unique and exciting picture book partnership.

Illustrator notes Chloë Inkpen grew up surrounded by picture books and has a natural gift for storytelling. A love of language and art saw her swap an English course for a degree in illustration, graphics and photography at the Glasgow School of Art. She spent her final year specialising in children’s book illustration and was awarded second place in the Macmillan Prize for Illustration in 2008.