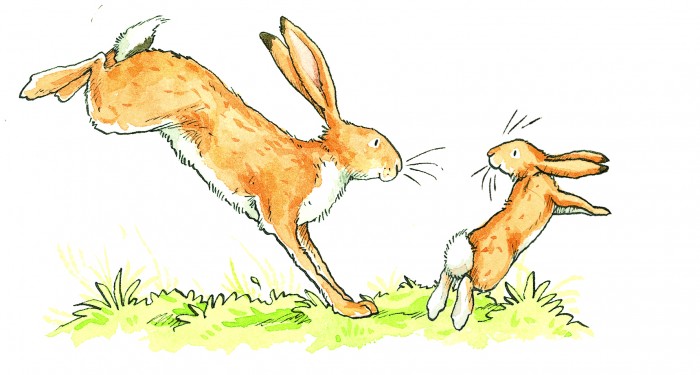 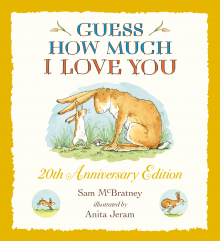 GUESS HOW MUCH I LOVE YOU 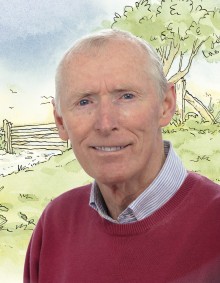 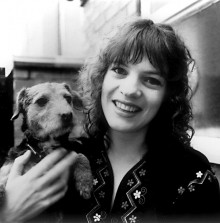 Guess How Much I Love You

The close-knit bond between parent and child is affectionately told in the timeless tale of Big Nutbrown Hare and Little Nutbrown Hare, whose expressions of love go – to steal from another well-loved hero – to infinity and beyond…

An eloquent text, charming illustrations and a simple love story are key to the enduring appeal of Guess How Much I Love You, now celebrating its 20th anniversary with a glitzy gold-embossed edition.

There are echoes of Elizabeth Barrett Browning’s romantic sonnet ‘How do I love thee? Let me count the ways’, where Browning professes a devotion that reaches ‘to the depth and breath and height my soul can reach’.

There is a repetitive rhythm to the simple text as Nutbrown Hares Little and Big grapple with the notion of how to quantify love. Who loves whom the most? Love is all around, so let’s just say they both love very much
– and leave it at that.

There’s plenty of playful competitiveness  in the parent-child relationship with the eager-to-please child’s enthusiasm countered by a gentle parental indulgence  – even though Big Nutbrown does always insist on having the last word!

The extravagance of Big Nutbrown’s demonstrations of love – which ultimately stretch not just ‘to the moon’, but ‘to the moon and back’ – leave Little Nutbrown with a sense of awe and admiration – not to mention eliciting that feel-good warm glow that comes from knowing that you are truly loved.

The simple elegance of Sam McBratney’s text is complemented with a lightness of touch in Anita Jeram’s softly illustrated pictures. The background scene is a pretty pastoral idyll, while the sprightly figures of the hares strike a series of playful poses. Their body language speaks volumes, too, with Little Nutbrown tugging on Big Nutbrown’s ears (those long ears portraying a surprising varied range of expressions, with a jaunty angle here and a quizzical tilt there.

Those same long, strokeable and suckable ears have also proved a tactile bonus in the range of soft toys that accompany the book (you can see a range of accompanying merchandise at the Guess How Much I Love You website).

This is a truly classic picture book in the very best sense of the word. Parent and child, words and pictures: a match made in heaven.

Fun fact What’s the difference between a hare and a rabbit? Hares are generally larger, and have longer hind legs than rabbits and longer ears with characteristic black markings. The expression “hare-brained” refers to hares’ skittish tendencies – though obviously in the case of the Nutbrown family, their hare-brains are clearly hardwired for love.

Did you know? Guess How Much I Love You is a huge international hit, selling 28 million books in 53 languages. Licensing products include plush toys, apparel, games, puzzles and calendars.

Author Notes Author Sam McBratney has written more than one hundred books and scripts. He spent his postwar childhood “in short trousers and Fair Isle jumpers.” He remembers studying for his 11-plus exam, before going to grammar school, and then on to study History and Political Science at Trinity College in Dublin. Sam became a teacher and taught at a further education college, a grammar school and a primary school. He took early retirement from the teaching profession to concentrate on his career as a writer. Sam is married with three grown-up children, six grandchildren and a tortoise, and lives in County Antrim, Northern Ireland.

Illustrator Profile Anita Jeram was born and brought up in Portsmouth. Anita worked in a variety of jobs in a factory and a kennel after leaving school before doing a foundation course in Visual Studies at Manchester Polytechnic, followed by a degree in illustration. Her first book, Bill’s Belly Button, was published a year after she graduated. Anita is married to a palaeontologist and has three children and a menagerie of animals, including cats, dogs, rabbits, toads, a lizard, a snake and a tortoise. She lives in Northern Ireland, and hopes, eventually, to set up a wildlife sanctuary there.