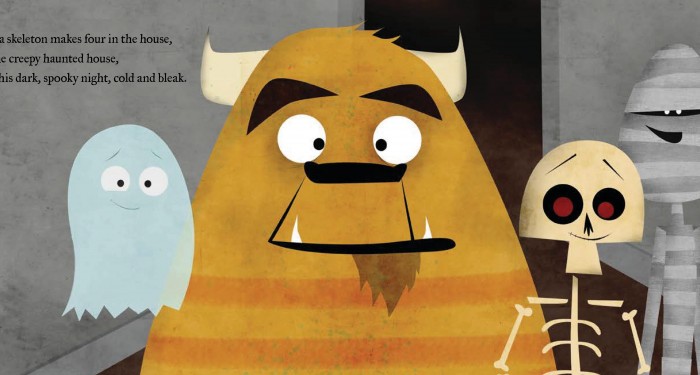 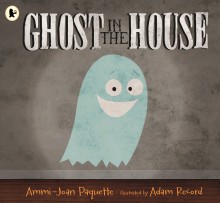 GHOST IN THE HOUSE

Ghost in the House

There’s a lonesome ghost in the creepy haunted house and, by the look on his face, he’s rather more scared than scary! But he’s not on his ownsome for long…

With the opening silhouette of the ‘creepy haunted house’ looking ominously like Bates Mansion in Psycho, the scene is set for craziness to kick off on this dark spooky night, where the quiet is soon broken by mysterious sounds.

A groan! What’s that? A mummy (of the bandaged Egyptian variety). Now a growl! Oh, it’s just a monster. Each growl, click-clack and shriek heralds the arrival of another spooky critter to add to the growing troupe – and a chance for youngsters to practise their counting skills.

The repetitive, rhyming text is filled with rich, evocative vocabulary that creates suspense – “They stagger and stomp in this spine-chilling romp, until suddenly they hear…” – as each mysterious creature is revealed.

Humour comes from expressive illustrations and the fact that each ‘scary’ monster has a look of sheer fright on their face as a pair of googly eyes appear in a dark corner, or the shadow of a skeleton suddenly emerges. Then it’s all smiles again when they realise the mystery sound comes from one of their spooky kin.

The comic finale to this jolly counting caper is sure to empower any young child who might be scared of monsters and ghouls. If there’s one thing guaranteed to make monsters scarper, it’s the sight of  the scariest creature of all – a little boy.

Fun fact For many years, the Bates Mansion, better known as the Psycho house, stood on the Universal Studios Hollywood backlot. Although it looked impressive from the outside, it was actually only a facade, not really a house at all.

Did you know? Everybody can recognize the famous shower scene from Psycho the minute they see it, accompanied by Bernard Herrmann’s aptly named track Screaming Violins. Hitchcock originally wanted the scene to be accompanied by a deathly silence, but Herrmann went ahead and composed a score anyway. Thankfully, Hitchcock liked it and put it in.

Author notes Ammi-Joan Paquette began writing as a child, spending hours creating masterpieces of stapled paper and handwritten words, complete with pen-and-ink covers and boxed illustrations. Her first picture book, The Tiptoe Guide to Tracking Fairies was published in 2009. She lives with her husband and two daughters in the Boston area, where she continues to write books for children and young adults.

Adam Record is an illustrator and designer from Utah, who has worked with many clients such as Scholastic, Harper Collins, Hallmark, Disney and Fisher Price. Adam started doodling on a padded bench in church, and started getting serious about drawing when someone actually bought one of his drawings. Adam finds inspiration in old children’s books and vintage posters, and likes Miroslav Sasek, Mary Blair, Saul Bass and Edward Gorey.