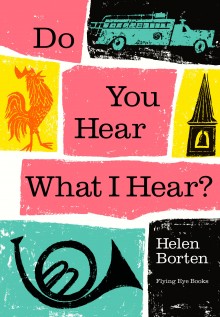 DO YOU HEAR WHAT I HEAR? 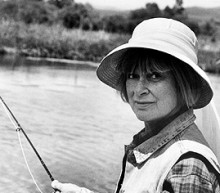 The satisfying slurp of a milkshake
 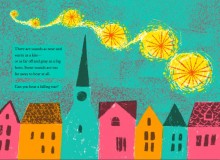 Can you hear a shooting star?

Do You Hear What I Hear?

From the lilting sounds of a lullaby to the exciting hullabaloo of the circus, the gentle rustling of leaves in the breeze to the rhythmic swish of the tide, sounds – and the emotional reaction they evoke in us – are explored in this delightful exposé.

There is a rich symphony of sounds all around us, but how often do we stop and really listen? This book encourages readers to think about different sounds we encounter, from the alarm bell that awakes us in the morning to the surprise of a sudden sneeze or the wonder of an echo.

First published in 1960, Do You Hear What I Hear? oozes a gloriously retro vibe with strong Mid-Century Modern sensibilities. Images are created with strong graphic impact and a bold textural feel in a vibrant colour palette that would easily lend itself to interior decor (a bit like Orla Kiely).

Helen Borten takes readers through their day, mingling with nature where crickets are chirping but the sounds of a butterfly’s wings are barely imperceptible, tuning into the chugg and whistle of a train to the deep roar of trucks and dramatic claps of thunder.

Using rich evocative language, sounds are described as “thick and dark, like molasses”, “skinny, tinny” and “warm as a kiss.” From jingles and jangles to crashes and bangs, noises provide a never-ending and ever-changing soundtrack to our lives.

Excitement reverberates throughout this book as sounds are vividly described with such poetic imagery it almost makes you want to close your eyes and just listen… But then you’d miss the real star of the show: Borten’s magnificently stylish images

If the words provide the poetry, then Borten’s images provide bold visual accompaniment, from the shining golden brilliance of a shooting star (with a teasing text that asks “Can you hear a falling star”) to the strident “Oom-pah-pah” of a marching band.

The graphic images are created using four spot colours, a process that mixes Pantone inks to create a unique colour palette which is then printed in layers. In this case, the result is gorgeously sympathetic shades where turquoise, pink and yellow predominate where the ‘layered’ effect adds a slightly rough-round-the-edges textural appeal.

The art of noise has never looked so good.

Fun fact The greater wax moth (Galleria mellonella) has been identified as having the sharpest hearing in the animal kingdom – up to 150 times more sensitive than a human’s. Scientists suggest the moth’s hearing has evolved to help them stay one step ahead of their predators, as their ultra-sensitive hearing comes in handy for bat detection.

Did you know? The sound made by the Krakatoa volcanic eruption in Indonesia in 1883 was so loud it ruptured eardrums of people 40 miles away, travelled around the world four times, and was clearly heard 3,000 miles away.

Author notes Helen Borten was born in Philadephia, PA in 1930. She attended the Philadephia Museum College of Art and produced the main body of her well loved children’s picture book illustrations in the 1960’s. Her illustrations are a beautiful collaboration between woodcut, collage, paint and printing techniques that make her work so rich and visually desirable. She now lives in Pennsylvania, US.