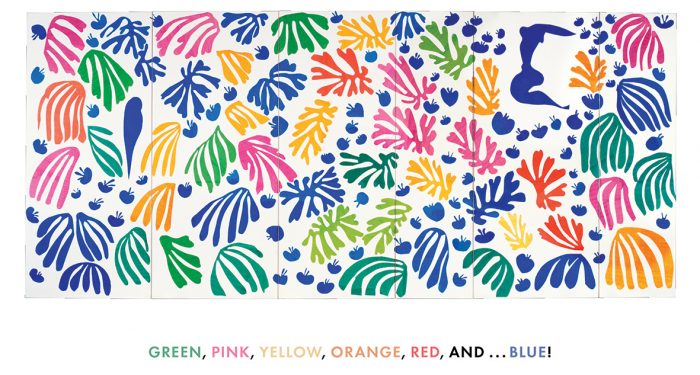 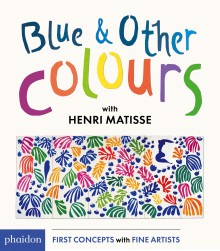 BLUE AND OTHER COLOURS WITH HENRI MATISSE 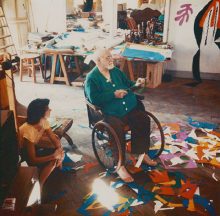 Blue and Other Colours

What better way to learn how to appreciate colour than through the work of fine artist Matisse and his playful use of a rainbow of hues?

Red and yellow and pink and blue – all the colours of the rainbow are here, via the vibrant palette of French artist, Henri Matisse. Showcasing graphic works of art from Matisse’s ‘painting with scissors’ period, themes of nature in a myriad depiction of leaves and floral patterns and shapes, alongside more abstract ideas in ‘The Sails’, with two white triangles ‘sailing’ in a sea of blue.

Children learning their colours will have great fun identifying and pointing out the many hues, especially with the playful multiple appearances of one special hue as a recurring theme: “Ooh, blue”, “more blue!” and “there’s blue again”. Parents, meanwhile, will enjoy revisiting some of Matisse’s mood-enhancing masterpieces that he himself described as “a soothing, calming influence on the mind, something like a good armchair which provides relaxation from physical fatigue.”

The first book in the distinguished ‘First Concepts with Fine Artists’ series, this hardback edition features over 25 works of art and a playful, inviting text that will engage young readers (and viewers). Aficionados will also appreciate the list of artworks, dating between 1943-1953, alongside information on the museums and institutions where some of the works currently preside, should you wish to appreciate them in person!

Fun fact Matisse loved colours, but he liked to use them in surprising ways. He once painted a portrait of a woman with blue hair and a pink, yellow and green face. Pablo Picasso is also famous for his Blue Period, between 1900 and 1904, when he painted essentially monochromatic paintings in shades of blue and blue-green, only occasionally warmed by other colours.

Did you know? Matisse enjoyed the patronage of American novelist and playwright Gertrude Stein and prolific art collectors, the Cone Sisters, who purchased a number of his paintings. Matisse also introduced them to Picasso, whose paintings they also purchased. Matisse was good friends with artist Pablo Picasso, though they later became rivals.

Artist notes Henri ÉmileBenoît Matisse (1869–1954) was a French artist, famous for both his use of colour and his fluid and original draughtsmanship. He was a draughtsman, printmaker, and sculptor, but is known primarily as a painter. Along with fellow artists Pablo Picasso and Marcel Duchamp, Matisse is commonly regarded as one of the leading figures who helped to define the revolutionary developments in painting and sculpture throughout the opening decades of the twentieth century. Matisse emerged as a Post-Impressionist, and first achieved prominence as the leader of the French movement Fauvism. Although interested in Cubism, he instead sought to use colour as the foundation for expressive, decorative, and often monumental paintings. Still life and the nude remained favorite subjects throughout his career; North Africa was also an important inspiration.

Diagnosed with abdominal cancer in 1941, Matisse underwent surgery that left him chair and bed bound. Painting and sculpture had become physical challenges, so he turned to a new type of medium. With the help of his assistants, he began creating cut-out shapes and paper collages, or decoupage. He would cut sheets of paper, pre-painted with gouache by his assistants, into shapes of varying colours and sizes, and arrange them to form lively compositions. He called the technique “painting with scissors”. Initially, these pieces were modest in size, but eventually transformed into murals or room-sized works. The result was a distinct and dimensional complexity – a unique art form that was not quite painting, but not quite sculpture.