Seat height adjustable from 25 to 46cm

This innovative toddler ‘bicycle’ gives even the youngest of children the opportunity to join in on family bike rides around the park.

Made from sustainably-grown wood, this ‘running’ bike has no pedals and is propelled by the young rider’s feet, Flintstone-style. With no pedals and the ability to convert from a three-wheel tricycle into a two-wheeled (but still pedal less) bike, it will also keep your child company right through til they are ready for their ‘big bike’.

“We wanted to create a bike that our children could have fun riding throughout their toddler years, until they were ready for a two-wheeled bike with pedals,” says Design Studio Co-Director Jenny McIver.”It needed to be tough enough to last but also lightweight enough for them to manoeuvre.

Whatsmore, there is a growing body of scientific research that indicates that learning on a balance bike such as this is the most effective way to teach children how to balance on two wheels, leading to more effective riding techniques on a bicycle in the future.

To include one (or more) on your own Moodboard, see our Gallery of designs and colours of the Wishbone Trike here.

Designer Details Established by New Zealanders Richard Latham and Jenny McIver, the story of Wishbone all began in the unlikely venue of a New York residential bathroom, where Richard, who was also an industrial designer and stay-at-home-dad, built the first prototype of the now-award-winning Wishbone Bike while Jenny was busy down the road working for the United Nations…  Richard tested the bike with his son in Central Park and soon the pair were being stopped by New York parents intrigued by the bike, and asking to order one for their own children. After they started production of the bike, it was very quickly recognised with a number of awards from the Best Toy Award in 2009 to inclusion in Time Magazine’s Style & Design 100 of 2009. 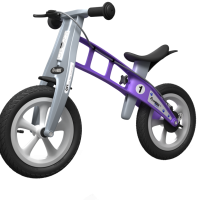