Pick your own fresh herbs

It is with good reason that Italian food has a reputation for being popular with young children: what’s not to love about the simple deliciousness of pizza and pasta (both great as feed-yourself finger foods for toddlers). Follow that with a sweet scoop or two of gelato, and you’re onto a winner.

Vapiano is an Italian eaterie with a difference. Firstly, it hails from Germany, and secondly, it uses a fresh modern approach to service that puts a quirky spin on ‘fast food’

The very first Vapiano opened its doors in Hamburg in 2002. Today, there are over 140 Vapianos in 26 countries spread across four continents, from Stockholm to Saudi Arabia, Brisbane to Budapest, Nuremburg to New York, Finland to France – and still growing.

Deriving its name from the Italian saying: “Chi va piano va sano e va lontano”, which roughly translates as ‘He who lives a calm life stays healthy and lives longer’, Vapiano ditches la vida loca in favour of la dolce vita promoting a relaxed, convivial ambiance. And don’t expect free Wifi: this place is all about promoting the fine art of conversation, so they have made a conscious effort to eschew Wifi in an attempt to encourage good old-fashioned chit-chat. The philosophy of Vapiano is that diners sit alongside strangers – and often strike up friendly banter. And, as if to prove the point, when a mother and her two children sat at our table, in no time, eight-year-old Joe was chatting away.

Three London locations boast a Vapiano: Great Portland Street (where we dined), Bankside and Soho. Each restaurant has a modern open-plan design, with large oak tables and counters with high stools. There’s even a real, living olive tree, planted in a raised ‘garden’ surrounded by pots of fresh herbs, sort of bringing the outside inside. It may sound a little bizarre, but it adds to the laid-back, rustic aura. On arrival, each customer is given a ‘chip card’  (including children, although they can’t order without an adult’s permission) then you sit where you please. Food is ordered at the cooking stations, where your chip card will be scanned. Pasta dishes are cooked in front of you: for other orders, you take your seat and wait for your chip to vibrate (the kids love being in charge of this!) and you collect your freshly cooked dishes.

For the uninitiated first-timer, it can seem a little daunting – a bit like when, all those years ago, we were first confronted with the newness of Starbucks and its dazzling array of coffee in so many permutations (wet/dry/frothy). In actuality, ordering is straightforward; what’s more, the friendly staff are on hand to point you in the right direction and answer any questions.

So what of the food? There is plenty of standard Italian fare – Antipasta, Insalate, Pasta and Pizza – and seasonal specials every two months. All the pasta and ravioli is freshly made every morning in the specially designed manifattura (pasta machine) in the middle of the restaurant. If you’re there early, it’s quite a spectacle!

Already with an eye on dessert, we decided to skip starters (though the Strawberry Spinach Salad with Goat’s Cheese, Red Onions, Pinenuts and Raspberry Maple Dressing sounded very intriguing!) and went straight to the mains. Joe opted for a child-size Margarita, while I sidestepped my usual Capricciosa (ham, mushrooms, artichokes, olives, tomatoes, mozzarella) because it didn’t have the addition of the egg (preferably still gooey, the way I like). Instead, I chose the Crudo e Fichi (prosciutto tipo Parma, fresh figs, honey, tomatoes, mozzarella). Grace loves prawn linguine, but wasn’t keen on the creamy sauce in the Scampi E Spinaci.

One of the benefits of giving your order directly to the chef is that you can customize your dish, so Grace ordered a bespoke prawn pasta dish with garlic and herbs

Returning to our tables, there was time to absorb the buzzing atmosphere of the place and indulge in a little people-watching. Dining midweek in the early evening, diners included sociable post-work gatherings fresh from the offices around Oxford Circus and a surprising number of families. One conversation overheard was of one young lad (not mine) saying: “They make the best pizzas here”, as he busily got to work with his colouring-in activity sheet. There was also a hip young Soho couple, out with their toddler who was directing proceedings from her highchair, as her mother spoon fed her. Looking at the larger groups of friends, I could see how the chip card can be a real bonus, as there’s none of that “But I didn’t eat any garlic bread” when it comes to settling the bill.

In no time, our chip card was vibrating (Joe was on the alert!), we collected food and sat down to savour our dishes. Pots of fresh basil and flavoured chilli oils and balsamic vinegar adorn the tables – a nice touch so you can add truly fresh ingredients. Being averse to anything green, Joe declined  but Grace and I happily got sprinkling. Nothing beats the smell of fresh basil.

As planned, a brief pause to digest our meals and we were ready for desserts. True to form, Joe opted for gelato, while Grace and I shared a couple of bijou puds: a creamy, dreamy Crema di Fragola and Tiramisu della Casa. Then we were ready to present our cards at the till and off, with appetites fully satiated. Of course that didn’t stop Joe from shovelling a spoonful of Gummi Bears from a counter pot into his hand. For a moment, he paused guiltily as he caught the cashier’s eye. She just smiled and said “That’s what they’re there for.”

Why go For a relaxed, informal ambiance, great food and a novel approach to service

While you’re there You’re perfectly situated for shopping in London. For the grown-ups, there’s John Lewis and Liberty within minutes, or a little further up at Marble Arch Selfridges. And of course, the kids wouldn’t say no to a visit to London’s famous toy store, Hamleys, in Regents Street. 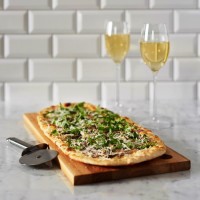