This village-turned-ski resort in the Tarentaise valley of the French Alps has been attracting skiers since 1938, when the British skier Peter Lindsay recognised the area’s potential as a winter sports resort. Since then it’s been a firm favourite of the international ski set.

There are some ski resorts that you just have to ski, and close to the top of any bucket list has to be Méribel in the French Alps

Maybe it’s because the village is at the heart of the Three Valleys, the biggest ski area in the world with 600km of pistes. Or maybe it’s because here, it feels like Christmas every day. Or perhaps it’s the fine mountain cuisine, mouth-watering patisseries or aromatic paper-thin chocolate crepes you can enjoy mere moments from the slopes. One thing is for sure though, once Méribel has you in its clutches, it’s hard to prise yourself from its snowy grip.

I first visited as a child-free journalist (well the children had been left safely at home in their father’s care). Winding our way up the twisty mountain road in blinding sunshine from the valley town of Brides Les Bains it was hard to believe that we were actually going to ski. As clumps of wet, spring snow slid off the fir trees and dripped onto the ground peppering the grass, my thoughts were of hikes in the abundant Alpine meadows. But as the last hairpins faded away and the 2738 metre-high Saulire peak stood majestically before us it was clear that in Méribel the ski season was still very much under way.

Skis on, goggles donned and poles in hand we made our way to the Plan de L’homme lift, where the skies were now dramatically laden with heavy, snow-filled clouds – such is the tween-like prerogative of the mountains to change their mood in minutes. An afternoon spent sessioning the runs on and around the Tougnet peak worked up an appetite for a five-star afternoon tea at Le Kaila, our luxury bolthole for the night.

The next day, guided by our instructor (and free spirit) Raoul, who encouraged us to “feel the snow under our feet”, we skied like maniacs on a whistle stop tour of the Three Valleys. Taking the Olympic Chair we bombed down “Jerusalem” on an off-piste mission towards the gem of St Martin. Turning back to Méribel, we took the Loze chair, then skied the steep Dou des Lanches towards the village of La Tania, before winding our way back to Méribel for a late lunch. Divine to say the least!

With kids, of course, it’s a different story – but thankfully, a fairytale one! For the youngest amongst them, Méribel has the perfect pistes with learning the art of skiing with slow-loading chairlifts, magic carpets (travelators) and draglifts for children and beginners. A ‘mini-pass’ is an alternative to a full lift pass giving access to these easy, child friendly runs.

The French Ecole Ski Français has a nursery (for children from 18 months to five years old), which offers supervised play and entertainment. The infamous Les Piou-Piou club is the ESF’s ski school (attendance is rite of passage for French children) where mini skiers between three and five can learn to ski whilst negotiating over-sized inflatable snowmen.

The Magic Garden is a superb learners’ area with a magic carpet (conveyor belt), chalet and toilets at the top of the Altiport. Run by the independent Magic in Motion ski school groups are between three and six children and the emphasis is on having fun, lots of it: expect your little one to come home recalling tales of skiing the animal trail, or the lumps and bumps run, and with a medal around their neck. Older skiers will love the fun factory, or the race academy where they’ll hone their piste skills.

In the après-ski department, Méribel offers children the time of their life with an Olympic ice-skating rink, a huge swimming pool with slide and a bowling alley. For something really special take the kids for a ride in a horse-drawn sleigh. 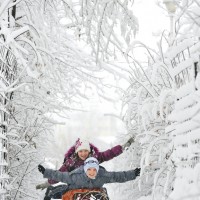