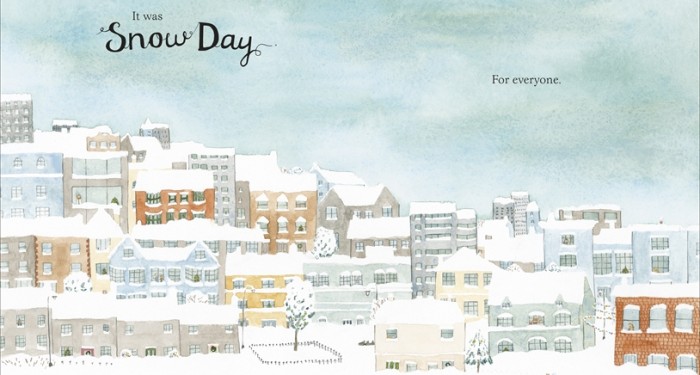 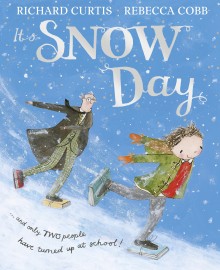 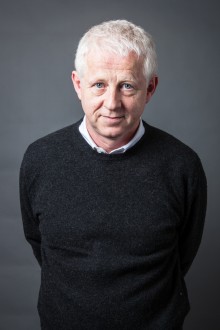 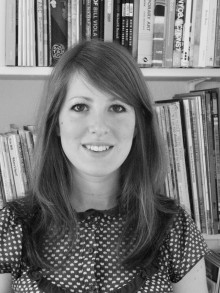 Nothing beats the magical moment of whipping open the curtains to discover a snowy white blanket has covered the earth. And it spells one thing: no school today!

As the second collaboration (after The Empty Stocking) between writer Richard Curtis and illustrator Rebecca Cobb, the premise of this charming picture book – an unexpected invitation to legitimately bunk off and have fun in the snow, thanks to a meteorological miracle – brings universal delight.

We all recognise the mundane ritual of waking up to begin another boring day at school, another dreary day at the office… But all of that banality goes swiftly out of the window when a significant downfall of snow happens overnight – throwing the world into chaos (This is perhaps a rather British phenomenon, since transport systems are invariably plunged into disarray and councils never seem to have stocked up on sufficient salt to grit the roads. When it comes to snow, the Brits are quite frankly rubbish at coping with it.)

The downside to the chaos, however, is more than compensated for by the fact that having your school (or work) closed means there’s nothing you can do but go outside and enjoy! Well, that’s the idea that most people have but for one school boy and one stern teacher it doesn’t quite turn out that way.

The air might be filled with a stiff winter chill, but the atmosphere between the two protagonists is frostier still. Could perchance the peculiarity of their situation help forge an unlikely friendship on this very special day?

As a master of characterisation, Richard Curtis knows how to create plausible personalities that resonate and pull on the heartstrings without going overboard into sentimentality (though it has to be said, Curtis is one for stirring up the emotions. Not many dry eyes in Love Actually, eh?).

There are hints of unhappiness in both their lives: Danny’s father was always abroad working, and Mr Trapper’s father was the same. But this is not a day to feel sorry for yourself: Snow Day is their finest hour!

There’s also plenty of animation in Rebecca Cobb’s illustrations. They have a lovely natural feel that belies their ingenuity, packed as they are with witty details and amusing little touches, like the parade of pussycats practically disappearing into a hazy blizzard, and the snowmen who bear more than a striking resemblance to Danny and Mr Trapper, right down to Mr T’s pipe! Even Mr Tapper’s puffs of smoke (tut, tut!) materialise with satisfied smiles on their faces as a sign of the feel-good glow that has been bestowed upon the hitherto curmudgeon who now has a spring in his step and a knowing smile on his face.

But this is not simply a tale about the fun and adventure of a Snow Day. This is a tale of unexpected friendship and an unlikely alliance between a naughty schoolboy and a strict school teacher. It’s also a story that makes you realise that you might think you know someone – and even rather dislike them – but that when you dig a little deeper, you discover you have more in common than you think.

Oh, and it definitely makes you want it to snow. A lot. And soon.

Illustrator Profile Since graduating from Falmouth College of Arts in 2004, Rebecca Cobb has illustrated for Guardian Guide, Guardian Weekend magazine, The Independent and Waitrose Food Illustrated. She has also collaborated on three picture storybooks with the Orange-Prize winner Helen Dunmore, et in her native Cornwall, as well as The Paper Dolls by Julia Donaldson. Her debut solo project, the hugely accomplished Missing Mummy approached the subject of child bereavement with great honesty, senstivity and integrity. She also wrote and illustrated Lunchtime, Aunt Amelia and The Something. Her latest book Snow Day sees her reunited with Richard Curtis.